The Man Who Walked Through Time

Friday at the Historic Book Library #3

The Man Who Walked Through Time by Colin Fletcher

Colin Fletcher was born on March 14, 1922 in Cardiff, Wales.  Fletcher got his education in England and eventually fought in the Royal Marine Commandos during World War II.  Fletcher later was a trainer at the Mountain Warfare Traing Centre before moving to Africa with his wife Sonia Mary Ash.  In 1947 they operated the Kitale Hotel in Kenya.  After the marriage ended in 1948 Fletcher farmed in Kenya and Surveyed in Zimbabwe before moving to Canada.   In 1956 he moved to the United States.  We walked the length of California along its eastern edge in 1958 and published his book about it in 1964 The Thousand Mile Summer.

Colin Fletcher hiked the Grand Canyon in 1963, and published The Man Who Walked Through Time in 1968.  Fletcher went on to write a series of books including River which documented his rafting/hiking trip from the Wind River Mountains of Wyoming to the Sea of Cortez.  Fletcher writes eloquently, and is a believer in keeping the Grand Canyon untouched.   Brooks Atkinson of The New York Times Book Review describes him well “If anyone is entitled to define the personality of the Grand Canyon, Colin Fletcher is the man.”   In the epilogue Fletcher cries for help from the threats facing Grand Canyon “Unless we do something about it, you and I, we may soon find that this book has become a requiem for Grand Canyon.” It is interesting how his words ring as true in 2020 as they did in 1968.

First of all, the book is really enjoyable to read.  Colin Fletcher is really good at describing things and taking you into the Grand Canyon through his words.  Secondly, his adventure calls many people.  Hiking the Grand Canyon is something anyone who has peered over the edge of the canyon has thought about doing.  Fletcher takes it to the max, by spending 2 full months hiking, exploring, discovering, and thinking about every facet of the amazing Grand Canyon.  The book has a nice fold out map showing the route taken by Fletcher in his journey.  He started by hiking down Havasu Creek to the Colorado River and then backtracked back up Havasu Creek and followed the rim for part of the journey.  Fletcher was relieved to reach the Colorado River near Bass Camp.  “For two days and three nights I camped at the foot of Bass Trail, in a little rock-bound bay beside the river.  At first, luxuriously aware that for the moment I had escaped the pressures of time and of uncertain water supply, I lay fallow.”  Fletcher continued past Phantom Ranch and out to Point Imperial via the Nankoweep Trail.  Along the journey Fletcher received only 3 air drops of supplies.

“There is a powerful human compulsion to leave things tied up in neat little bundles. But every journey except your last has an open end. And any journey of value is above all a chapter in a personal odyssey. Its end is not so much a goal attained as another point in a continuing process. And the important thing at the end of a journey–or of a book–is to keep moving forward, refreshed, with as little pause as possible.”–Colin Fletcher

Home » The Man Who Walked Through Time 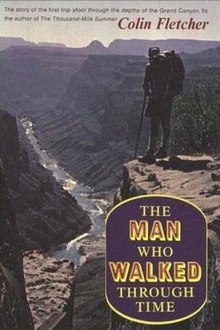