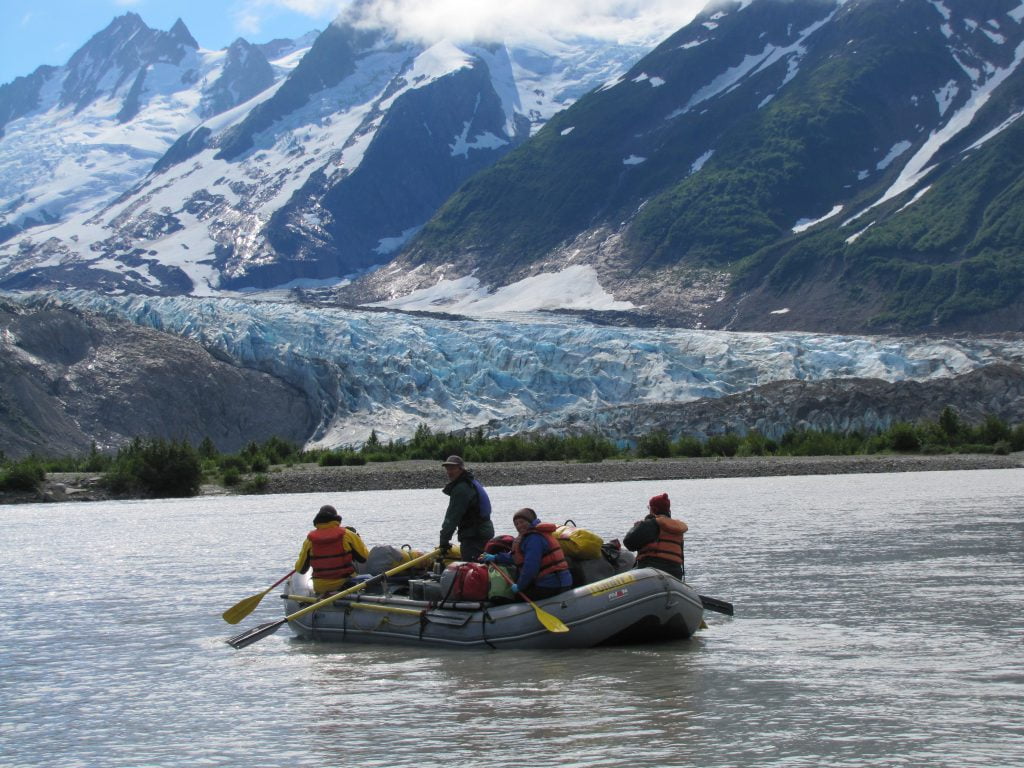 “The Wild still lingered in him and the wolf in him merely slept.” ― Jack London, White Fang

Home » Rafting Down the River with CRATE » Alsek River Rafting 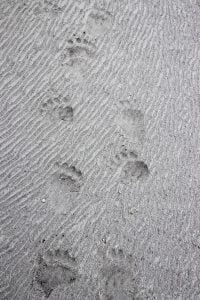 Our Tatshenshini and Alsek River trips originate in Haines Alaska. The evening before the trip we have a meeting at our warehouse. During this meeting we answer any last questions, get everyone fitted with drysuits, and prepare everyone for the journey to the put in the following morning. Day 1 of the expedition starts with a drive from Haines, Alaska, past the Canadian border into the Yukon Territory of Canada. The trip starts on the Dezadeash River at Serpentine Creek. Getting to Serpentine Creek can be an adventure in itself. The dirt road is extremely rough and crosses many small streams that can become quite large on warm days.

Increased Flow in the Alsek River 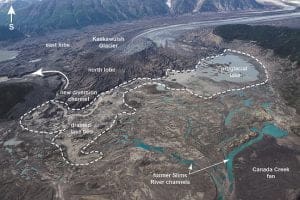 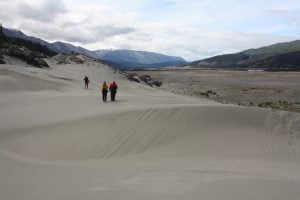 The confluence of the Kaskawulsh and Dezdeash to Lowell Lake is considered “critical bear habitat” and is managed in a way to benefit Grizzly Bears. The area is rich in bears and other wildlife. Camping is only allowed at certain campsites and only one night can be spent in this section.  Throughout the landscape you will see large blocks of granite called “erratics.” They are called erratics because they don’t fit in with the geology and rocks of the area. These glacial erratics originated high in the mountains and were transported via glacier, and then via iceberg across a now extinct lake created by the surging of the Lowell Glacier and the damming of the Alsek River. Eventually the icebergs melted, and the erratics sunk in the now extinct Lake Champlagne. Further evidence of this now extinct Lake Champlagne is the giant sand dunes seen on river left below Lava Creek. The sand in these dunes was at the bottom of Lake Champlagne.  When the ice dam gave way, the sand was exposed just like the erratics. Now the wind has blown the sand into gigantic dunes. 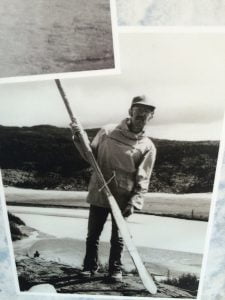 In 1978 the Canada Geological Survey team found an oar on a high beach terrace near Marble Creek. The oar was axe-hewn and sat about 100 feet above the present river level. The oar now is in the Kluane National Park visitor center in Haines Junction, Yukon, Canada. The oar was probably used on the ancient Lake Champlagne.

The Lowell Glacier is the first close up look at a glacier on the Alsek rafting trip. When the Lowell Glacier receded it created a basin for Lowell Lake. We usually camp on the edge of Lowell Lake for one or two nights. The area is a “Martian landscape” with very little foliage. This is because as late as the 1950s, Lowell Glacier had stretched all the way to Goatherd Mountain and completely blocked the river. There hasn’t been enough time since this event for many plants or trees to establish themselves. The sand and clay does a great job at preserving footprints from wildlife moving across the area. 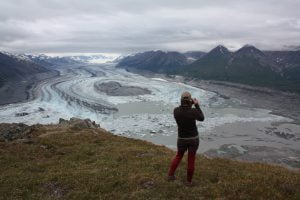 On our inaugural Alsek rafting expedition in 2010, we were doing a layover day. Many of the group were hiking on Goatherd Mountain and got a firsthand show of a young bear frolicking in a small swimming pool of water behind our camp. Down at camp, three of the group members (Vicki Mackay, Bruce Quayle, and John Trowbridge) stayed behind to watch camp. They had no idea the bear was there. It was quite a site for John Toner, Walker Mackay, Mindy Mackay and the rest of the hikers to see this bear so close to camp unbeknownst to our group down at camp.

Before the Slims river was captured in 2016, it was common for our trips to spend 2 nights at Lowell Lake and spend an entire day hiking up to the top of Goatherd Mountain. Now that the river has increased its volume it has become hard to fjord the side channels of the Alsek to get to the start of the hike.

The biggest rapids of the trip are found below Lowell Lake. Everyone will dawn drysuits for this section of river. The first big rapid is easily avoided by taking the right channel around a couple islands. When you look back up river you will be glad to have taken the easy route. The second big rapid is Lava North. Lava North is named after the famous rapid on the Grand Canyon.  We will scout the rapid from the left shore. The rapid is full of some big water features just like Lava Falls and Crystal on the Colorado River in the Grand Canyon.  The big difference is the water is only 34 degrees Fahrenheit.  After successfully navigating Lava North, it is time for some celebration.  A tributary from the Fisher Glacier, some turquoise blue water we call Wolverine, and the Bates River follow closely after Lava North.

The Best Fish Tacos Ever and an Energetic Wolverine 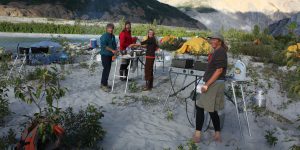 On our first trip down the Alsek, we camped on a beautiful sandy beach where a small clear stream of water was flowing past before joining the Alsek.  The water was from the melting of the Fisher Glacier.   It was one of the most beautiful river camps anywhere.  We had some great halibut tacos prepared specially by Martha Clark Stewart and watched the sun set on the colorful mountains downstream. Just as the sun was setting, Mindy Mackay saw a wolverine along the back talus slope of the camp. The wolverine was determined to summit the steep and rocky slope.  The wolverine was always moving full speed.  There were three different draws on the slope.  It attempted the first draw, got about 10 feet from the top, and had to turn around.  It ran all the way back to the bottom and up the second draw and back down.  Finally the wolverine found a successful route up the third draw, disappearing into the trees and out of sight. 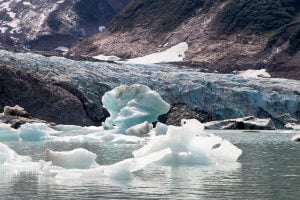 The Alsek River stays fast below Bates Creek. The scenery is breathtaking and the mountains are high. There are amazing waterfalls and sandy beaches.  It is not uncommon to see moose or Grizzly Bears unaware of our rafts floating by them.  The Alsek River continues to grow in size due to glacial feeder streams.  One such stream is Range Creek.  As the crow flies, it is about 20 miles from the confluence of the Alsek River and Range Creek to the confluence of the Tatshenshini River and Detour Creek.  Range Creek and Detour Creek share the same canyon and have headwaters that are very near each other.  The pass into Detour Creek is about 800 feet higher than the Alsek at the Range Creek confluence.  It is believed that in the past the Tweedsmuir Glacier has surged just like the Lowell Glacier.  As “Lake Tweedsmuir” filled up the Alsek spilled over into Detour Creek and down the Tatshenshini River.

The Story of Bear Knoll on an Alsek River Trip 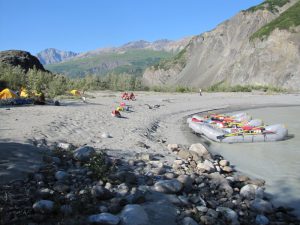 On one of our Alsek River trips, we camped on a large sandy beach just below Range Creek.  It was a warm August day in British Columbia.  We camped early and set up camp.  After camp was set up, Walker Mackay, John Toner and Sybrena Smith decided to do an exploratory hike up to the top of a knoll behind the camp.  From the open beach, the journey would require breaking through some dense foliage before hitting a draw of talus slope up to the top.  The guides were almost to the top when they looked down to their left and saw a large Grizzly Bear a little more than a rocks throw away.  The bear stood up, sniffed, and ducked back down into the greenery.  Instead of running away like almost every bear in Alaska does, the bear moved closer.  This time standing up a rocks throw away, the bear was obviously curious.  It ducked back down in the greenery and appeared on the other side of the thin ridge at the top of knoll.  The bear was within 100 feet.  The wind was blowing toward it.  After a minute or two of sniffing and standing the bear decided to retreat back into the woods.  This encounter was a good reminder to hike in groups in Bear Country.  From then on we have called the camp and small knoll behind the camp “Bear Knoll.”

Exploring the Alaskan Serengeti on an Alsek Raft Trip 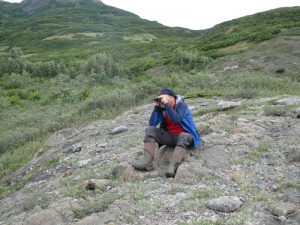 Leaving from Bear Knoll, the canyon widens and offers nice wildlife viewing opportunities.  Sometimes our trip stop at what we call the “Alaskan Serengeti”.  The landscape is mostly open with big rolling hills and it is relatively easy to gain elevation, find a nice resting place, and pull out binoculars to scan the landscape.

The next important stop is at the camp above Turnback Canyon.  This is where the helicopter will sling load our boats and carry the people around the class VI whitewater of Turnback Canyon.  Across the river the Tweedsmuir Glacier’s blue ice is visible calving off into the Alsek.  There is a memorial to Walt Blackadar at this camp. 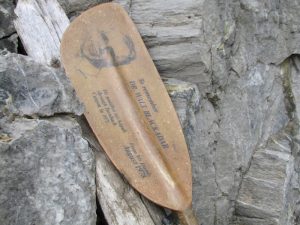 Blackadar is famous for his first descent of Turnback Canyon which he completed on August 25, 1971, solo.  In doing so, he is revered by an entire generation of paddlers.  Blackadar said of the achievement, “One huge horrendous mile of hair, 30 feet wide, 50,000 cubic feet per second and twenty degree downgrade going like hell.  Incredible! I did not flip in that mile or I would not be writing….I’ll never go back, not for $50,000, not for all the tea in China.”  Blackadar did not start kayaking until he was 43 years old and his run down Turnback Canyon occurred at the age of 49.  He was featured in Sports Illustrated where they compared his achievement to the first ascent of Mount Everest.  Now Mount Blackadar towers above Turnback Canyon.  If time and water levels permit, there may be a chance to hike down to the first rapids of Turnback Canyon, and peer into the same rapids Blackadar paddled into. 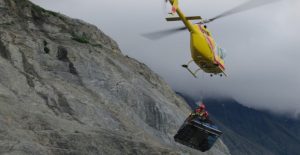 The helicopter portage over Turnback Canyon is another amazing experience in itself.  Viewing the rapids, canyon, and glacier from above has to be experienced to be completely appreciated.   Once all of the gear and people are flown around Turnback Canyon, the rafts are re-inflated, rigged, and placed back on the water. Form here to the confluence with the Tatshenshini the river becomes wide and braided.

The Confluence of the Alsek River and Tatshenshini River 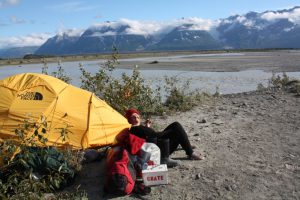 At the confluence of the two major river systems the views are awe inspiring. There are petroglyphs on an Island between the two mighty rivers.  It is believed at one time the Tlingit village of Tinix Ani was here.  The village was believed to have been washed away when a Lowell or Tweedsmuir Glacier Dam broke in the mid 1800s.

The Tatshenshini and Alsek share their last 50 miles.  You can visit our Tatshenshini River rafting page to learn about the lower section of these two incredible rivers.

Home » Rafting Down the River with CRATE » Alsek River Rafting