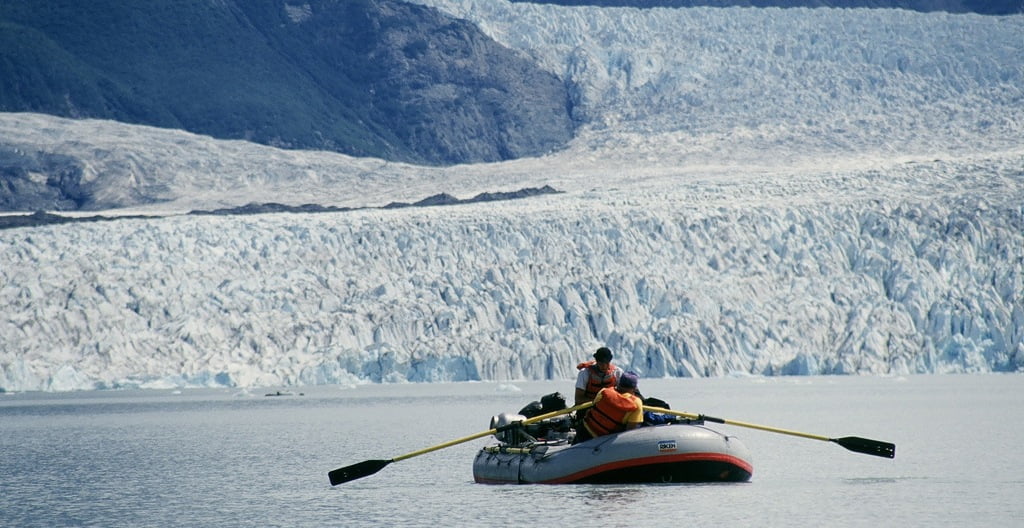 Rafting Down the River

"May all those who care so much about wilderness that they are willing to take a stand to ensure its preservation, and to future generations. May they, like us, always have the chance to experience Tatshenshini Wild" --John Schnell

Home » Rafting Down the River with CRATE » Tatshenshini River Rafting 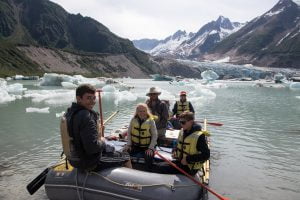 Each Summer we run 1-3 rafting trips in Alaska.  We always include our Tatshenshini Rafting Expedition, one of the most visually exciting rivers in the world.  On this rafting trip, you will experience eagles soaring, grizzlies roaring, and glaciers reaching close to the river’s edge.  As the river grows from a small alpine stream to a major waterway of great proportions, so too grows the landscape, until in the final days, 15,000-foot snow capped peaks encircle the horizon.

The Tatshenshini and Alsek Rivers have their headwaters in the extremely rugged regions of Northwest British Columbia and Yukon.  Their corridors and tributaries connect a vast wilderness composed of adjoining parks and preserves in the United States and Canada that covers more than 60,000 square miles.  This is the largest protected ecological unit in the world.  It contains the largest non-polar ice field in the world, the highest coastal mountain range in the world, and the only completely protected large river drainage system in North America.

In recognition of its extraordinary scenic and wildlife values, the Tatshenshini-Alsek area has been designated a World Heritage Site by the United Nations.  It is one of the “must see” places of the world, where pristine nature still exists to excite the imagination and nourish the spirit.

Incredible Biological and Geological diversity along the Tatshenshini River 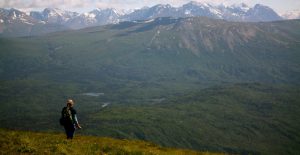 Traveling by river is the only way to see and experience the incredible biological and geographical diversity that exists within the Tatshenshini-Alsek wilderness area.  From the alder and aspen forests of the Yukon, through the steep mountain valleys of British Columbia, to the ice fields of Alaska’s Glacier Bay, the river sweeps through landscapes of wondrous size and design.

The first day of our expedition down the Tatshenshini River we drive from our warehouse in Haines, Alaska to the put in at Dalton’s Post, Canada.  Dalton’s Post was active in the late 1800s and was located on one of the routes to the Yukon gold fields.  Shortly after leaving Dalton Post the river picks up speed and enters a narrow canyon.  We fit everyone with drysuits for this section of the Tatshenshini River.  The canyon is usually class III, but at higher water levels can become IV+.  Soon the narrow canyon widens and the river mellows.  The first nights camp is found at or near Silver Creek.

One of the best hikes of the rafting trip is Goat Ridge.  The hike is accessed from Sediment Creek and gains elevation quickly.  Once on top of the ridge hikers get a great view of the river down below, and get a chance of capturing a glimpse of a Mountain Goat in its natural habitat.  Bears and fox are also routinely seen along the route. 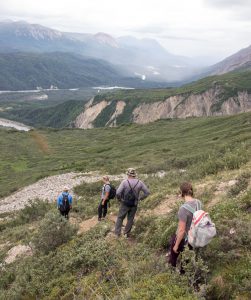 In the 1950s, a small copper rich mountain was discovered by helicopter near where the O’Connor River joins the Tatshenshini River.  This mountain was named Windy Craggy.  Because of the remoteness of the mountain, nothing happened until the 1980s when a company from British Columbia obtained some interest in the mine by agreeing to pay for the exploration of the mountain.  Windy Craggy is rich in Copper, with an estimated value of around 10 billion dollars.  The mine would have been a huge open pit mine with roads and bridges criss-crossing the Tatshenshini River and its tributaries.  Luckily the environmental impacts from the mine far outweighed the value in dollars and cents.  On June 22, 1993, B.C. Premier Mike Harcourt created the Tatshenshini-Alsek Park.  In addition, in 1994 UNESCO/IUCN added the park to their World Heritage List.  The park became an extension of the pre-existing Kluane National Park/Wrangell-St. Elias National Park and Reserve and Glacier Bay National Park World Heritage Site.

Around 1990 a large flash flood created a new rapid on the Tatshenshini River.  The new rapid was located at the proposed site of a bridge in conjunction with the Windy Craggy mine.  The rapid was named “Monkey Wrench,” as an outcry to stop the building of the Windy Craggy Mine.  Today it is a reminder about what could have been. 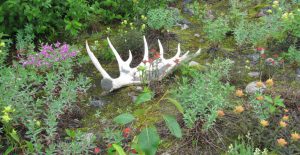 The Tatshenshini River nearly doubles with the addition of the O’Connor River and the Tkope River.  The river becomes wide and braided.  Melt Creek enters on river right shortly before the Tatshenshini’s confluence with the Alsek.  Melt Creek has beautiful blue water and again almost doubles the volume of the Tatshenshini.  At this point the river valleys are wide and the scenery is incredible. 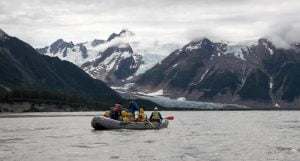 Shortly below the confluence, the Alsek leaves Canada and enters the United States and Glacier Bay National Park. The Walker Glacier, until recently, was easy to access and hike on. It has been greatly affected by global warming during the time we have operated on the Tatshenshini River. On our first trip in 1978, the glacier was only a few hundred yards from the river channel. Now the glacier is set back thousands of feet from the river and almost inaccessible due to the enormous lake it has carved out and treacherous glacial moraine deposited along the glaciers edge for hundreds of years. 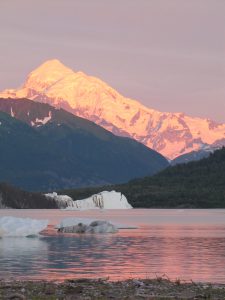 If the weather is clear, 15, 325 foot Mount Fairweather will be visible.  The peak of the summit is only 12 miles from the Pacific Ocean. The mountain adds an incredible backdrop to the already stunning landscape of the Alsek River. The Alsek flows into Alsek Lake which has been created by the recession of the Alsek Glacier. The camping along Alsek Lake may be the best of the trip. There are hundreds of icebergs floating in the lake.  Some of these icebergs jut over 100 feet out of the water. About 90% of an icebergs mass is underwater. As the ice underwater melts it changes the icebergs center of gravity and it rolls over. Sometimes the icebergs roll over because a big piece of them breaks off. Sometimes the entire lake is calm and still. Then there will be this huge crack and splash. With time, the edge of camp is blanketed with waves form the iceberg rolling or breaking, that lap at the shore. 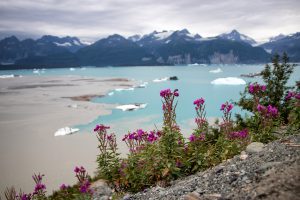 From Alsek Lake to the take-out at Dry Bay is less than 15 miles. We are not allowed to camp at Dry Bay. Depending on our flight time, the last morning can be an early one. After a quick breakfast and loading of the rafts we will float the remainder of the trip along Barbazon Mountain Range towards the Pacific Ocean. Once at Dry Bay, the rafts will be disassembled and packed into the airplanes for the return trip to Haines. Guest are generally taken to Yakutat, Alaska and then flown via jet back to Juneau.

If you have any questions or to book a Tatshenshini Rafting adventure today please call us at (800) 253-7328.

Home » Rafting Down the River with CRATE » Tatshenshini River Rafting