Friday at the Historic Book Library #2

#3 The Man Who Walked Through Time by Colin Fletcher

Grand Canyon Treks was published in 1970 by La Siesta Press of Glendale, California.  The book contains information on 20 different hiking and backpacking routes and trails within the Grand Canyon.

The book was written during a time when there was very little information about hiking and backpacking within the Grand Canyon.  When Colin Fletcher hiked the Grand Canyon in 1963 his biggest source of information was Harvey Butchart.  In his book, The Man Who Walked Through Time, Fletcher wrote”I inquired of park rangers, packers, geologists, and men who had run the river several times.  But before long it dawned on me that when it came to extensive hiking in remote parts of the Canyon, none of them really knew what they were talking about.  So I set about tracking down the experts on foot travel.  In the end I discovered that they totaled one:  a math professor at Arizona State College in Flagstaff.  But Dr. Harvey Butchart, I was relieved to find, knew exactly what he was talking about.”

In the introduction from 50 years ago the author sums up Grand Canyon hiking today:  “The Grand Canyon is not the place for one’s first experience in hiking….The newcomer should test himself in the summer heat and the rugged terrain before attempting the longer trips.”

Harvey Butchart was born in Hofei, China, some 250 miles west of Shangai.  He received his preparatory schooling at the American School nearby.  The school did not offer traditional sports so Butchart turned toward hiking and mountaineering in the nearby hills.

When Butchart returned to the United States he earned a Mathematics degree from Eureka College in Illinois.  This is the same school that former President Ronald Regan graduated from a few years later.  Harvey Butchart eventually graduated with a Ph.D. in math from the University of Illinois in 1932.  He came to Arizona State College(Now Northern Arizona University) in 1945.  He was the head of the math department there for 22 years.

Like many mathematicians Dr. Butchart was number oriented and kept analytical logs.  When Butchart says he spent a certain amount of time or days hiking, climbing, or exploring the reader can be assured these are correct.  Butchart acknowledges George Wharton James and E.D. Mckee as authors he read that suggested routes he explored in the book.

This book was the first in depth backpacking and hiking guide to the trails of Grand Canyon.  It is very detailed and gives great descriptions of the routes in Grand Canyon.  The book is especially interesting to anyone who has some familiarity with the trails of Grand Canyon and those who have rafted the Colorado River through Grand Canyon.  The book includes sections on a number of inner canyon routes:  Kaibab Trail, Bright Angel Trail, North Kaibab Trail, Clear Creek Trail, Grandview Trail, Hance Trail, New Hance Trail, Tanner Trail, Hermit Trail, Esplanade West of Bass, Great Thumb to Supai, Havasu Canyon, Nankoweep Basin, Chuar Valley, Unkar Valley, Hindu Amphitheater, Shinumo Amphitheater, and Tapeats and Deer Creek.

The book has too much good information to choose just one passage.  It is amazing the amount of time and effort Buchart put into exploring the Grand Canyon.  In the Hermit Creek section, Butchart writes about Louis Boucher.  Boucher is rarely talked about in any Grand Canyon books.  “Louis Boucher must have been quite a character.  Unable to wrangle dudes like Bass and Hance, he befriended wrecked rivermen and he entertained a geologist and his wife.  As Edwin Corle said, He wore a white beard, rode a white mule, and told only white lies.” 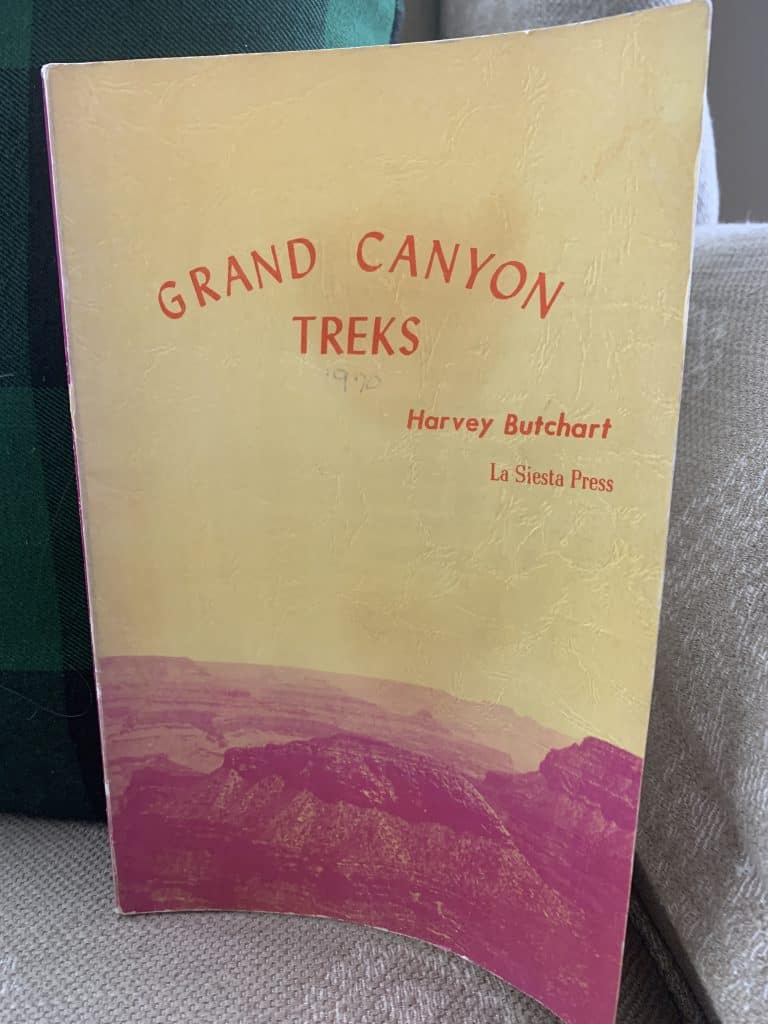