Personal Impressions of the Grand Canyon of the Colorado is a book collected and compiled by GK Woods of the personal impressions left by Captain John Hance’s guests during the 1890s.  It was published for GK Woods, Flagstaff, Arizona Territory by the Whitaker & Ray Company of San Francisco in 1899.  The book is particularly interesting to river runners of the Grand Canyon.  It is fun to compare and contrast what visitors think about the Grand Canyon today with those who visited it over 100 years ago.  As a river guide some of the comments below could be taken out of a personal river guest log this past summer.  Moreover Captain John Hance is a legend to river runners because of his tent camp and guiding,  his famous storytelling, the asbestos mines, and the rapid that has taken his name.

Captain John Hance moved to the Grand Canyon from Tennessee in 1883 looking to make his fortune mining the walls of the Grand Canyon.  After a huge amount of work building trails and mining a small amount of Copper and Asbestos, Hance realized there was much more gold and silver in the tourists pockets who were starting to flock to Grand Canyon.  Hance turned his life work toward being a guide and hotelier.  He built the first tent camp on the rim of the Grand Canyon and placed an ad in the Flagstaff Paper explaining his expertise in showing guests the Grand Canyon.  With a hiking trail connecting rim to river already in place from mining, Hance was successful from the beginning of this endeavor.

Hance was known for spinning tall tales around the campfire at night or anytime he had an audience.  Apparently he would of been a great poker player because many new visitors to the Grand Canyon believed every word he said.  Some of his more famous tales include telling guests the Grand Canyon is so hot at the bottom that the wings of flies melt off, about the time he rode his trusty mule across the cloud filled Grand Canyon, and how he single handedly dug the Grand Canyon.  One time during this storytelling a young girl tugged at Hance’s shirt and asked what happened to all the dirt.  For the first time in his life Hance was lost for words.  Supposedly Hance’s last words were “yeah, what did I do with all that dirt.”

From his guestbook it is clear that Captain John Hance was an amazing guide, storyteller, and overall good guy.  His guests loved him and he loved the Grand Canyon.  John Hance passed away in 1919 which is the same year that Grand Canyon became a National Park.  Hance is buried in the small cemetery on the South Rim.  In addition Hance Rapid is named after the Captain.

“I can cheerfully say that this, the Grand Canon of the Colorado River, is the grandest sight of my life-as I noticed in this little book of Capt. John Hance, a great many people say indescribable.  I can say no more.”

“By all means visit the Grand Canon of the Colorado River, in Arizona.  See Hance, too.”

“Of all the sights in the world this is the greatest sight I ever have seen.  Words cannot tell the grandeur, beauty, immensity, and sublimity of this wonderful production of Nature’s own work.  I would advise all tourists to visit this canon.  You cannot be disappointed.  The beautiful forests we travel through going to the canon is worth the trip alone.  I am coming again to stop here for a month.  I have visited many places, but this beats them all.  Good-by.”

“Intended to come last fall with Geological Congress, but am contented to open the ball for 1892, “Mente et Malleo,” as a special correspondent of Scientific American.  Went down Hance trail with Mr. Boucher, and stayed overnight, returning next day; enjoyed it immensely.  Found the trail in excellent order, and made the trip comfortably”

“I could hope all the those who come to the canon would get Hance to show them something of what he know, and that is more than can be suspected simply on the first outlook.  Much of my intense pleasure I owe to him.”

“I arrived at Flagstaff on the 25th of June, 1892, from Syracuse, NY, and started on the 26th of June for the Grand Canyon of the Colorado by stage line.  After riding all day through some of the the largest forests of pines, and the most beautiful valleys that I have ever seen, I arrived at the canon just when the sun was setting.  On the morning of June 27th, myself and several others were guided over the trail and into the canon by Captain John Hance.  After winding around here and there over the trail for several miles, we reached the river, which is a grand sight.  After resting an hour, and a plunge in the river, we started for the rim, arriving about dusk.  I have traveled all over the United States, have been about all the sights, but I have never seen such a wonderful and marvelous piece of nature’s own work as this, the Grand Canon of the Colorado River.”

“I have never witnessed anything like this.  It scares me to even try to look down into it.  My God, I am afraid the whole country will fall into this great hole in the ground.”

“This is a warm place.  I fainted when I saw this awful looking canon.  I never wanted a drink so bad in my life.  Captain, I won’t forget you for bringing me the oyster-can full of water.  Good-by”

“Universal comment is that it is too sublime for expression, too wonderful to behold, without awe, and beyond all power of mortal description.”

“God made the canon, John Hance the trails.  Without the other, neither would be complete.”

“Nature’s masterpiece is what I call the Grand Canon of the Colorado.  Why Americans will go to Europe and around the world, where they can see nothing to equal it, before they have looked upon this marvelous spectacle in their own land, I cannot imagine.  On September 12th I made the trip, with guide, from the rim down Hance trail to the river, and returned in eleven hours; but I would advise anyone of average strength and endurance to take the usual two days for the trip.”

“We have been to Moran Point, and we would like to go to the river, but I do not think we can.  I think it is very, very deep, and grand, and that it must have taken a very long time to make it.  I would like to stay here forever, it is so beautiful.”

“To Mr. Hance I wish a few gold-mines and many years of health and happiness besides.”

“It is a chasm to afford a place wherein the soul may seek repose, and which may prompt the deepest emotions to great activity, and lift man above himself.”

“Anyone who comes to the Grand Canon, and fails to meet Captain John Hance, will miss half the show…..Long live Captain Hance.”

“Glorious, laborious.  Glad I went.  Thankful its over.  Special thanks to Captain John Hance.  Splendid guide, in spite of his economy of the truth.”

“Captain John Hance,–a genius, a philosopher, and a poet, the possessor of a fund of information vastly important,–if true.  He laughs with the giddy, yarns to the gullible, talks sense to the sedate, and is a most excellent judge of scenery, human nature, and pie.  To see the canon only, and not to see Captain John Hence, is to miss half the show.”

In addition to tourism, and prior to that mining, John Hance tried to make some money from the patent and sell-off of his asbestos mining claims on the North Side of the river below Hance rapid.  Hance patented 325 acres in 1901 and sold them to his Hance Asbestos Mining Company.  Grand Canyon Park administrators basically missed them until William Randolph Hearst bought the 325 acre parcel inside the boundary of Grand Canyon National Park for back taxes in the 1950s.  Today the land is the only privately owned parcel in Grand Canyon.

Today river runners are still reminded of Captain John Hance by the rapid that bares his name at the bottom of the Hance Trail.  In addition, there are historical old mines and artifacts dotting the canyon walls.  So next time you pass mile 76 think about Hance and the impact he had on so many people coming to the Grand Canyon for the first time in the 1890s. 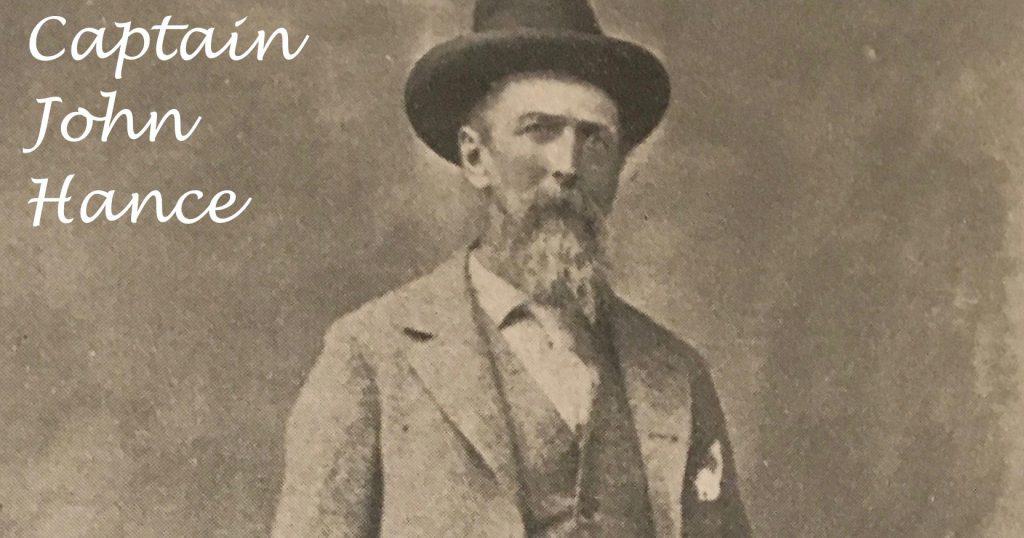