A Big Day Below Diamond Creek

Hello river enthusiasts! Here’s my account of navigating the river during our last Grand Canyon motor trip after some wild weather produced one of the largest flash floods I’ve ever witnessed. Upon later investigation, I learned this particular flood peaked at 10,000 cfs, which is nearly the volume of the river itself.  Enjoy! – Mikenna 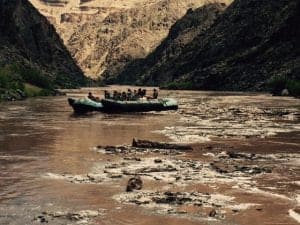 We all know the smell of mud-leaden floodwater, and I caught the scent of it almost before I could see the flood rushing from the mouth of Diamond Creek on August 7. As our two-boat motor trip approached, deep red water piled into the cliffs as it made its final turn from the drainage, flowing over what used to be a parking lot and cascading into the river. It was big water no doubt, but after taking a few pictures, scanning the scene and considering our take-out schedule, we ran Diamond Creek Rapid upon waves of white foam and dropped into the narrows of the Lower Gorge.

Beyond Diamond Creek the river rose significantly we began to encounter more than just heavy water and white foam. Swirling in both the eddies and the current, nearly filling the constricted channel of the gorge, was a slick of sticks, logs and other flood debris churning with the swelling river. The smallest pieces rode a boat of foam and tangled branches that held together through the waves and swirls like a woven blanket. The larger pieces bobbed up and down, often being upended and sucked beneath the surface of the water, only to be released suddenly and forcefully downstream. The largest logs compared eagerly to our side-tubes, 22 feet end-to-end. We had caught up with, and were caught up in, the front of the flood and all it had carried with it. 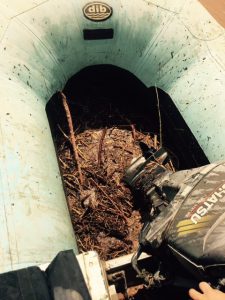 In an attempt to avoid the worst of it we drove in the eddies, pulled our motors and reached down to clear biggest offenders from beneath the frames and near our propellers. Still, it became quickly apparent that the debris was besting our efforts. When the motors on both boats repeatedly failed to take in the chunky water, an essential function of cooling, we pulled over to let the log jam pass downstream. With the help and patience of our hearty passengers we worked on our motors. As we changed one out, tied to the rocky slope of some no-name eddy around mile 230, we gave a few half-hearted “woops” to an Outdoors Unlimited rowing trip as they floated by us out in the current. We received a couple nervous hoots back, but the mood was obviously one of concentration. I was jealous that they were at least moving downstream; this was a good, albeit nerve-wracking, time to be in a rowboat.

Even tied safely to shore, our boats were being bombarded as debris circulated in the eddy. After an hour, we fired up the motors and floated for a few minutes, letting the trapped logs that had completely filled the underside of the boats work free before we made another attempt downstream.

It wasn’t long before I found myself with another clogged motor intake. After attempting to clear it, I stood on top of my motor box, poised to jump back down into the cockpit and fire-up the engine again. I could see Alex in the other boat approaching, trying to bump my boat to safety, and in a moment of hurried scrambling, I slipped. Instead of landing square on my feet, I fell into the cockpit and onto my ankle, rolling over it and stretching it far outside of its normal range. I didn’t even have time to stand up before a swollen bulge the size of a lemon was inflating like a balloon from both sides of my joint. 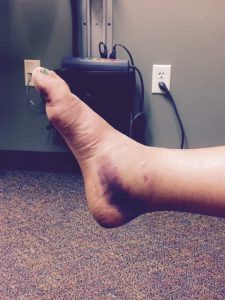 I took one deep breath, trying to push thoughts of broken bones from my mind, before I realized my boat was still floating dangerously close to a small garden of rocks just off the shore. No time for injuries; I had to act. I gave two big pulls on the motor’s pull chord. No go. I tried once more before I was forced to lift the engine out of the water just as the boat began bounce off the rocks I feared we’d hit. I cringed, more for the boat than for myself, as the rig played Ping-Pong once or twice before coming to a stop. I crawled on all fours out of the motor well to assess exactly where the culprit rocks were hanging us up. I instructed this particularly upbeat and capable group of passengers to move to the front of the boat in an attempt to shift the weight off the rocks. I asked them to bounce up and down and when they did, the boat slid just two measly feet before becoming lodged again. But two feet were all I needed. The rig had shifted just enough to place the motor over deep-ish water amid the rocks. I dropped it in. In a second attempt, the passengers – who were more like crew at this point – all jumped in unison and I fired up the engine. I gave one big turn of the throttle and the boat moved with a groan and  a slide. I quickly yanked the motor out of the water again as we floated over the remainder of the rocks and back out into the current. Thank you river gods! We were floating. 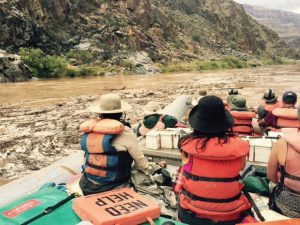 After a few more sessions of freeing propellers and clearing motor intakes, we ran the rapids of the Lower Gorge without incident. The passengers on my boat, who were just as excited and optimistic as they’d been all trip and throughout the entire ordeal, acted as spotters, pointing out the biggest logs as we encountered them, yelling “Port!” and “Starboard!” We picked our way through the remaining whitewater amid the clunking sound of wood hitting the aluminum frame beneath the boat and the unavoidable crack of stick vs. propeller.

I have never been so happy to see the calm water and wider corridor of Lake Meade. 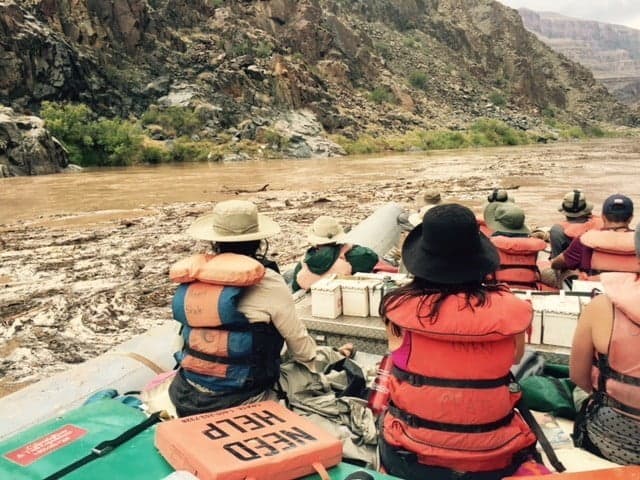