As we all know JW Powell had a way with words and his descriptions of the Grand Canyon have rarely been equalled.  Having just finished a Spring rafting trip in Canyonlands National Park we had to share Powell’s diary entry from July 17, 1869.  This entry includes the last 40 miles of the Green River’s course before joining the Grand, forming the mighty Colorado River, and plunging into the perils of Cataract Canyon.  The Colorado Plateau is such a unique place and if you have never seen Canyonlands National Park it is a place to put on your list.  The below entry will inspire your imagination:

July 17, 1869. – The line which separates Labyrinth Canyon from the one below is but a line, and at once, this morning, we enter another canyon. The water fills the entire channel, so that nowhere is there room to land. The walls are low, but vertical, and as we proceed they gradually increase in altitude. Running a couple of miles, the river changes its course many degrees toward the east. Just here a little stream comes in on the right and the wall is broken down; so we land and go out to take a view of the surrounding country. We are now down among the buttes, and in a region the surface of which is naked, solid rock – a beautiful red sandstone, forming a smooth, undulating pavement. The Indians call this the Toom’pin Tuweap’, or “Rock Land,” and sometimes the Toom’pin wunear^1 Tuweap’, or “Land of Standing Rock.”

Off to the south we see a butte in the form of a fallen cross. It is several miles away, but it presents no inconspicuous figure on the landscape and must be many hundreds of feet high, probably more than 2,000. We note its position on our map and name it “The Butte of the Cross.”

We continue our journey. In many places the walls, which rise from the water’s edge, are overhanging on either side. The stream is still quiet, and we glide along through a strange, weird, grand region. The landscape everywhere, away from the river, is of rock – cliffs of rock, tables of rock, plateaus of rock, terraces of rock, crags of rock – ten thousand strangely carved forms; rocks everywhere, and no vegetation, no soil, no sand. In long, gentle curves the river winds about these rocks.

When thinking of these rocks one must not conceive of piles of boulders or heaps of fragments, but of a whole land of naked rock, with giant forms carved on it: cathedral-shaped buttes, towering hundreds or thousands of feet, cliffs that cannot be scaled, and canyon walls that shrink the river into insignificance, with vast, hollow domes and tall pinnacles and shafts set on the verge overhead; and all highly colored – buff, gray, red, brown, and chocolate – never lichened, never moss-covered, but bare, and often polished.

We pass a place where two bends of the river come together, an intervening rock having been worn away and a new channel formed across. The old channel ran in a great circle around to the right, by what was once a circular peninsula, then an island; then the water left the old channel entirely and passed through the cut, and the old bed of the river is dry. So the great circular rock stands by itself, with precipitous walls all about it, and we find but one place where it can be scaled. Looking from its summit, a long stretch of river is seen, sweeping close to the overhanging cliffs on the right, but having a little meadow between it and the wall on the left. The curve is very gentle and regular. We name this Bonita Bend.

And just here we climb out once more, to take another bearing on The Butte of the Cross. Reaching an eminence from which we can overlook the landscape, we are surprised to find that our butte, with its wonderful form, is indeed two buttes, one so standing in front of the other that from our last point of view it gave the appearance of a cross.

A few miles below Bonita Bend we go out again a mile or two among the rocks, toward the Orange Cliffs, passing over terraces paved with jasper. The cliffs are not far away and we soon reach them, and wander in some deep, painted alcoves which attracted our attention from the river; then we return to our boats.

Late in the afternoon the water becomes swift and our boats make great speed.. An hour of this rapid running brings us to the junction of the Grand and Green, the foot of Stillwater Canyon, as we have named it. These streams-unite in solemn depths, more than 1,200 feet below the general surface of the country. The walls of the lower end of Stillwater Canyon are very beautifully curved, as the river sweeps in its meandering course. The lower end of the canyon through which the Grand comes down is also regular, but much more direct, and we look up this stream and out into the country beyond and obtain glimpses of snow-clad peaks, the summits of a group of mountains known as the Sierra La Sal. Down the Colorado the canyon walls are much broken.

We row around into the Grand and camp on its northwest bank; and here we propose to stay several days, for the purpose of determining the latitude and longitude and the altitude of the walls. Much of the night is spent in making observations with the sextant. 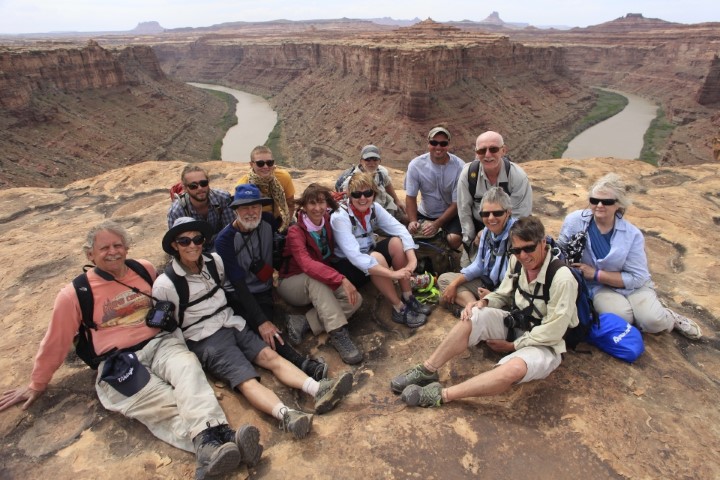 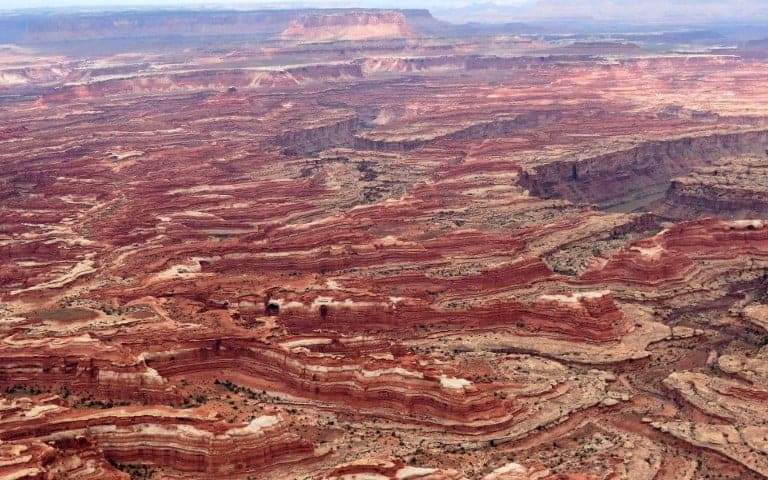