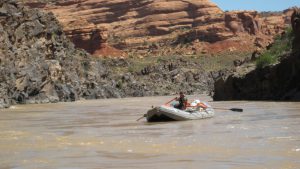 Few places match the rugged landscape of Westwater Canyon of the Colorado River. Combine the geologic record of exposed rock, the history of refuge for outlaws, the abundance of wildlife, the hidden gems of side-canyon exploration, Native American petroglyph panels, the wild rapids deep in the gorge, and its easy to see why National Geographic lists Westwater Canyon as one of the best river trips in the West. Whether you have one day or three, Westwater provides a wilderness experience just an hour and a half away from Moab, Utah.

Less than a mile below the ranger station, red walls of Entrada Sandstone capped with the Morrison Formation rise from the water and form a perch for Bald Eagles as we float by below. Within a few miles the canyon begins to narrow as sedimentary layers of rock rise up. Kayenta Formation on top of Wingate Sandstone on top of the Chinle Formation. Around the bend is where miners in the early 1900’s built a dugout cabin- roof still in tact. Littered around the entrance are remnants of their failed attempt to extract.

Across the river the first signs emerge of 1.7 billion year old proterozoic rocks made up of black metamorphic schist and gneiss. A similar sequence of rock found in the bottom of the Grand Canyon’s inner gorge, but in Westwater Canyon, the “Great Unconformity” or missing rock sequence is much older than the Grand Canyon. Here, 1.5 billion years of deposition has been eroded before the Chinle Formation was deposited 208 million years ago. 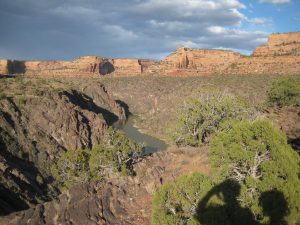 We begin our descent into the canyon where walls rise to 1,200 feet above. Small riffles form as the walls close in. At Little Hole Canyon on the right, a hike presents itself through a variety of Great Basin Desert flora and fauna. After a mile and a half and at the base of the Wingate cliff a petroglyph panel of big horn ship can be found, as if navigating their way up through a weakness in the canyon wall. The artists were Ancestral Puebloans who left this area roughly 700 years ago. 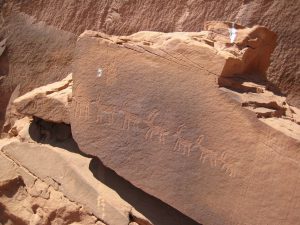 Another mile down the river and we get to my favorite camp, near the mouth of the Little Delores River. We are right above the back-to-back big rapids, and the sound of Little Delores Rapid can be heard. From here, it is possible to hike up the Little Delores River where a waterfall forms during spring run-off, or after a rainstorm. When it is dry, we hike up a steep trail to gain a view of the river below, and to see another panel of petroglyphs, these most likely from Ute Indians who came through much later than the Ancestral Puebloans. 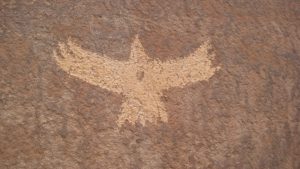 After the rapid at Little Delores there is a small cave on the left, with black soot coating the roof. Inside, two crude beds sag on top of rough-cut timber, and artifacts lie scattered around the stone floor. Some people say this outlaw hideout was refuge for counterfeiting brothers escaping the authorities in Grand Junction. Others claim this cave to be where Butch Cassidy laid low for the law to lose their trail. One thing is for certain. When Bert Loper and Ellsworth Kolb became the first to navigate this section of river by canoe in 1916, very few non-Native Americans had ventured into this rugged corridor.

On to the splashy waves of Marble Canyon Rapid, and rolling haystacks of Staircase Rapid. Next is Big Hummer, where a mound of water builds over boulders below the surface, and exits into a series of fun waves. Then comes Funnel Falls. At lower water levels Funnel feels like a waterfall, chuting through rocks below the horizon. At higher water, the Five-0 waveforms a big standing wave that feels like a roller coaster. 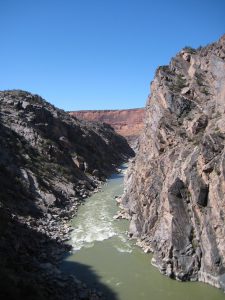 Through Surprise Rapid and Son of Surprise Rapid- both always bigger than they appear from above- and we come to the most infamous rapid of the canyon, Skull Rapid. Here, there is a critical move to the left to make, as most of the water plows into the Rock of Shock and either goes downstream or into an eddy carved into the cliff wall called the Room of Doom. This is the crux of the canyon, a class IV rapid at higher water. Just a few rapids remain, but the ride will be wild. 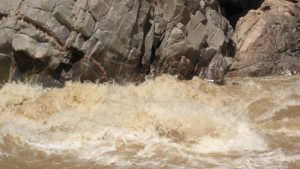 Rowing through Bowling Alley Rapid we approach Sock-it-to-me Rapid, my favorite. A few years ago I took my grandmother down the river, in her early 80’s. As we entered the rapid we accelerated, then stalled as the big curling wave stood the boat straight up in the air. Grandma emerged soaking wet and giggling, with a big smile on her face. She told me she hadn’t had that much fun in years!

On to Last Chance Rapid, we avoid the big domer in the center, and the river becomes peaceful again. The landscape begins to open, and the cliff swallows return to dart across the surface of the water, hunting for food. Not far is where the one and two-day trip ends. 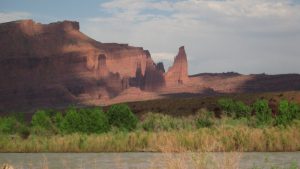 On the three-day trip, we meander through ten miles of mild water and enter Post Card Alley. This is a great place to capture photographs in the early evening glow of the Fisher Towers in the Professor Valley. Onion Creek is the first choice for camp, with good hiking and great views in the fading light. We camp under big cottonwood trees and spend our evening on one of the biggest beaches of this stretch. 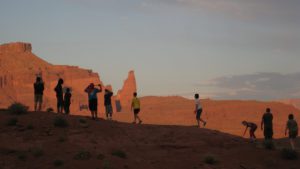 The trip finishes with small splashy waves and incredible views as we pass Castle Valley and drop back into another canyon corridor. We have traveled just over 50 miles of river in three days, told stories, camped on the beach, and ran some really exciting whitewater. For those who haven’t experienced the awesome adventure of Westwater Canyon, don’t let another river season float by. 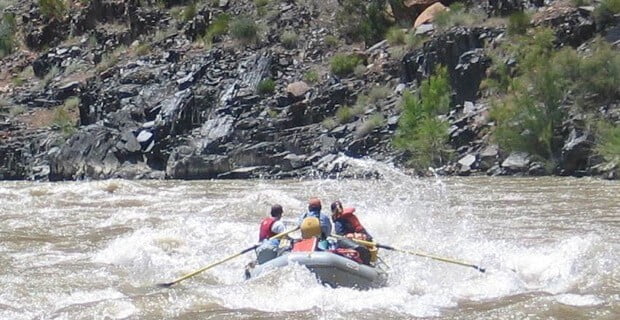