This article was recently published in the Grand Canyon Association magazine, “Canyon Views,” Vol. 20, No. 2, Spring 2013.

Although you can see many wildlife species at Grand Canyon, from small Abert’s squirrels to plentiful elk, some are more elusive. With patience and a trained eye you might catch a glimpse of a bighorn sheep scrambling up a cliff or a condor flying overhead. It’s rare to see a mountain lion, however. And that’s one of the reasons park wildlife biologist Brandon Holton finds them so intriguing.

“I love getting into the mind of a mountain lion and trying to figure out why are they going where they go,” he says. “It’s almost like being a CSI investigator.”

The mountain lion (Puma concolor), also known as the puma, cougar, panther or catamount, is a large cat whose habitat ranges from the Canadian Yukon to the Southern Andes of South America. Up until 10 years ago, little was known about these animals at Grand Canyon. Then, in 2003, the National Park Service began a biological study of mountain lions to uncover their habitat and behavior, how they impact park resources and whether they are a danger to humans. In 2008, Brandon took over the program. Since then, he and his team have put GPS collars on 32 cats – 22 on the South Rim and 10 on the North Rim – and typically track five animals at a time.

The most revealing places to study mountain lions are where they take down and feed on their prey – locations called kill sites. “It’s interesting to do kill site investigations and to recreate them,” says Brandon. “Why are they using a certain habitat? Where did they stalk the animal? Where was the ambush, and what was the struggle? I see all different types of burials, drags and day beds.”

Typically, males eat as quickly as possible and move on, spending one to five days at a site, depending on the season. Females will stay on longer, generally until the carcass is picked clean, especially when they are caring for older cubs. And yet one time. Brandon tracked a younger male who killed a bull elk and sat on it for 20 days. He had observed this mountain lion as a younger cat, and over time watched as the cat got bigger and bigger.

“When he was about three and a half, I walked in on him. He was 30 feet from me, and he had just gotten off a kill. He had to have known I was there, but he couldn’t have cared less. He just rolled onto his back, and his stomach was just so distended. This is not typical behavior when humans are nearby.”

Another cat, a female that was collared in July 2011, also exhibited atypical behavior. She dropped into the inner canyon in November and didn’t come out until April. She was mainly feeding on bighorn sheep and some mule deer. The female crossed the river four different times, always just below Turquoise Rapid. “Thus far, almost all of the collared cats remained on the rim year-around and rarely visited the deep inner canyon,” says Brandon, “but there could be more occurrences like this that we’re not tracking.” This uncommon behavior is one of the reasons the park is studying these powerful and solitary animals.

Mountain lions in Grand Canyon, especially males, typically have a very broad home range – about 150 square miles. Grand Canyon lion studies are run jointly between the U.S. Geological Survey (USGS) and Grand Canyon National Park Service (NPS) to increase sample sizes, distribute study costs and allow researchers to look at mountain lion ecology on a larger landscape scale. The lions roam far beyond the park’s borders; almost every collared mountain lion has used surrounding U.S. Forest Service land as much as, if not more than, the park itself. For example, two subadult males in the study dispersed south from Grand Canyon to the Flagstaff area.

Humans have virtually no reason to fear mountain lions. These cats avoid humans because they don’t see us as prey. We, however, can be very dangerous to them: 60 percent of collared mountain lion deaths are are due to hunting outside the park, and the second most common cause of death is being hit by a car, especially on East Rim Drive. Mountain lions cross the road, which parallels the rim, to set up their beds for the day. Their deaths could be greatly reduced if only people watched for animals and used caution when driving in the park.

In recent years, the joint NPS/USGS research program has begun to study predator-prey relationships, particularly interactions between desert bighorn sheep and mountain lions. As more is revealed about Grand Canyon’s largest wild predator, the ecosystem as whole can be better understood and protected.

One interesting result of Brandon’s study has been the contrast in behavior between South and North Rim mountain lions. The following data reflects what his team has learned from the mountain lions they have collared. 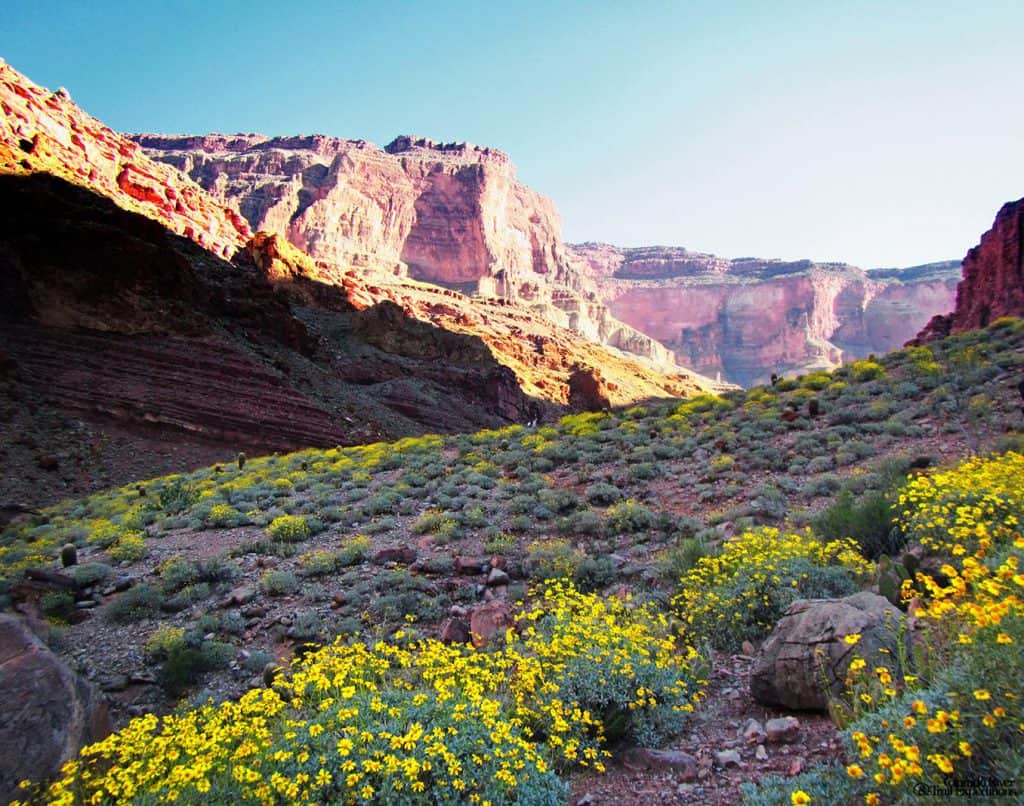