…Ahh Shinumo Creek. It was starting to get a little later in the day than most trips stay on the water, but I have always like to “stretch” the days and get as much in as possible on the trips I run, thus seeing and doing as much as possible. As Martha and Toner say you can “Sleep When You Are Dead.” This late afternoon stop at Shinumo Creek was more destiny than choice though. We had already had an exchange of guests at Phantom Ranch and ran the all the rapids from Zoroaster through Bass. I had thought I would camp somewhere amongst the 6 or 7 camps in the Bass area. Unfortunately there was a private trip at Emerald, Azra at Hotuata, a private trip at Ross Wheeler, a private trip at the Inscription, a private trip at the sandbar just above Bass, and of course a private trip laid over at Bass Camp. In addition up ahead were an Azra motor trip and 2 Canyoneers trips. I thought my odds of getting 110 mile camp were slim, but a few years earlier I had been hiking on the ridge above 110 and noticed a sandbar at 110.5 mile. This was my “Ace in the Hole” camp, something in the back of my mind that was as good or better than the host of small sandbars and rocky Garnet Camps from Walthenburg to Elves, and a place I had never seen anyone camped. We pulled our up-beat trip of 30 in to share the waterfall at Shinumo, knowing no trips would be coming behind us, and our fate had already been decided as far as where we would lay our heads down to rest when night fell.

We had a wonderful time at Shinumo Creek. The canyon was shaded, but the rocky debris fan from where our 37′ motorized rafts were parked to the mouth of the creek was still in the sunny glow of the beginning of sunset. Our guests who by now had become friends played in the cool water of Shinumo Creek, then returned to the warm rocks, laying on the red and orange rocks of the debris fan and on our grey and blue rafts. No one was “antsy” or in a “hurry” to leave, but you could tell a few of the group wondered where, or if we would be camping that night. We untied the rafts and headed around the bend through Shinumo Rapid and into view of the AZRA motorized raft and all the tents set up at 110 mile rapid. As we passed by the rafts my friend Wayne gave us a heartfelt wave.

Day 8 – Finally talked James into moving to my boat, so that each boat would have two riders. I didn’t see the hole in Serpentine rapid, didn’t read the book that said “stay left” and went right into it. A second of thinking “oh!” and upside down. I felt bad for James, because he had flipped in Tony’s boat on Day 3. Travis did a great job getting on the raft, pulling James up and getting a spare oar out and getting the upside down raft into an eddy. It took me a couple days to get my confidence back after flipping.

We pulled our rafts into 110.5 mile camp and did a quick scout of the camp. Checking the usual things like if their was enough room for our group and wondering where we would set up the bathrooms. Cots have made camping much easier these days. Before cots gravelly camps were pretty much out of the question, but now gravelly camps are semi-acceptable. With the loss of sand every year due to the flow fluctuations of Glen Canyon Dam, as well as the removal of sand flowing through Grand Canyon caused by Glen Canyon Dam, the beaches are getting smaller every year. In addition to the problem finding suitable camps, this has also made the camps with sand very popular. Many are camped at nightly. With this over use I speculate the beaches are becoming dirtier on the microorganism level, even when everyone in the Grand Canyon does their best to keep the canyon pristine. This beach was totally pristine though, and adequately covered in clean Grand Canyon sand. We set up camp. On one end of the beach I found a food stash in a rice bag, full of salad dressing and canned foods. I have stumbled upon many beer stashes and a few firewood stashes, but only a couple of food stashes. The stash of food looked at least 5 years old. The rice bag was torn and the Annie’s salad dressing’s label looked really faded.

For cinco de Mayo we ate a large Mexican Fiesta Dinner. After dinner everyone was tired from our epic day, and went to bed early. The guides pushed the boats out before bed, anticipating the normal nightly drop in flow, from the Dam 128 miles upriver. The Dam releases the most water from 8 AM to 5 PM during the work week, and depending how far down river you are camped, the water drop or rise can cause you problems during the night. Where we were camped the water level drops during the night, then starts to come back up at around 11 AM.

The next morning after breakfast Alex brought down a partially rusted ammo can down to our Kitchen. He liked to explore our camps, and he had found this ammo can wedged into the rocks above the sandy part of our camp. Me and the other guides were immediately drawn to the new found treasure. What would it hold? I opened the can up and realized this was somebody’s personal ammo can…there was a Kindle on top, underneath was a toothbrush, swiss army knife, and wallet. We looked at the wallet and its contents. Inside the wallet were expired credit cards, some cash, and a Colorado Driver License. We speculated that the ammo can had been here quite a while because of how rusted it was and because everything inside was expired. I packed the can onto my boat and looked forward to the challenge of locating “Bruce.”

Day 8 – I could see my ammo can of personal stuff was floating just out of reach, so I thought “swim for it”…But, then I saw the young men at the upside-down raft and decided I needed to swim to the raft. I tried to watch the ammo can from the raft, but it was hard to get it into the obvious eddy, so I couldn’t keep watching. Got the raft over and re-rigged, and headed to camp. I tried to look in every eddy and debris pile for days (apparently, as the ammo can only went 5 miles in nearly 4 years, I wasn’t looking in the right place). Some of the things in my personal can were sad to lose, but on the rest of trip the things I missed the most were my toothbrush and hairbrush.

After we cleaned up our trip we called our main office and Vicki was able to locate Bruce from his Driver’s License. We sent the Ammo Can back to Bruce and he was thrilled to have it returned as it had a lot of things that had value to him. It was fun to be part of a Grand Canyon story and get some good Karma from the river community. That is one of the great things about the Grand Canyon. In my experience I have almost always had good relationships with all of the people in the Grand Canyon whether they be fellow commercial boaters, private boaters, NPS staff, backpackers, or that random guy that doesn’t fit into any of these categories. The Grand Canyon brings out the best in people. 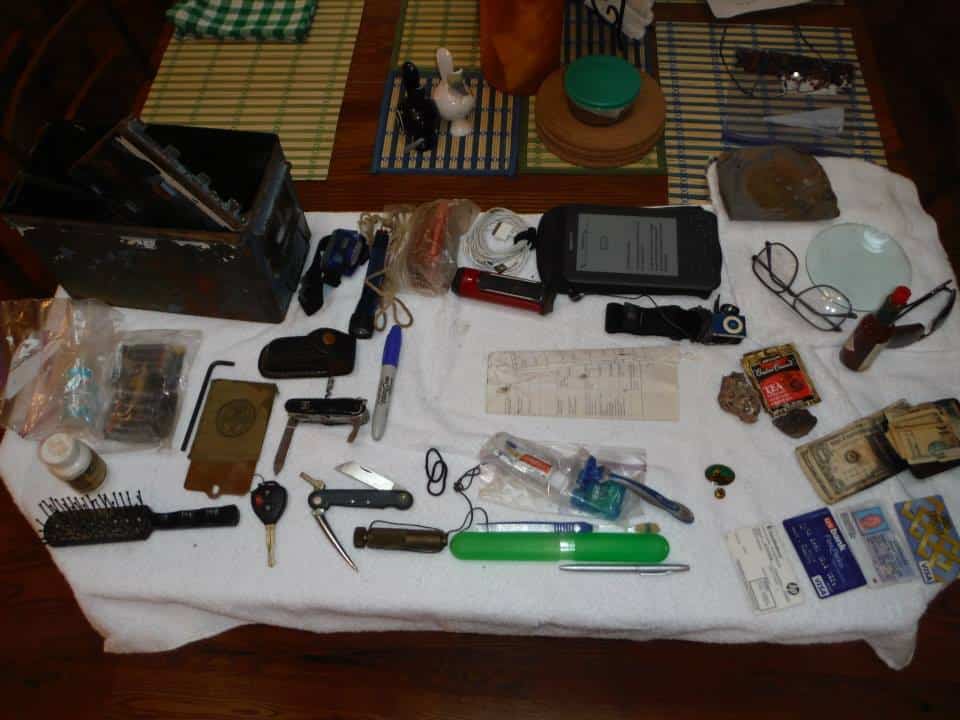