The photos below are just a few you will find in their archival project.

Edith Bass (left – daughter of William Wallace and Ada Bass) leads a visitor to the Grand Canyon down the Hermit Trail. In 1917, Edith married Hubert “Bert” Lauzon, who worked for her father at the canyon and a was a notable Grand Canyon pioneer in his own right. 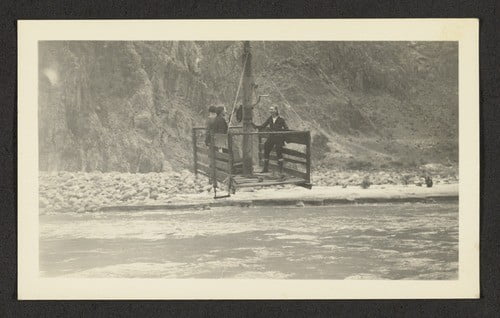 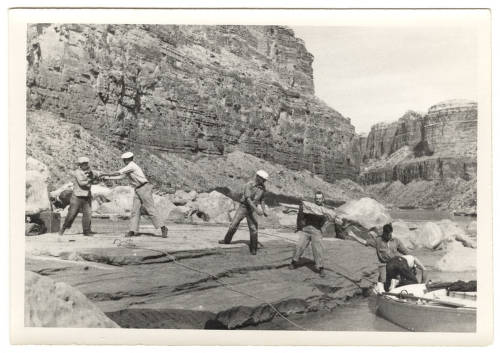 In this photograph, unidentified members of the 1937 Carnegie Cal-Tech science expedition unload gear and supplies from one of their three dories. One of the expedition’s scientists, John “Cactus Jack” Stark, created an illustrated book of doggerel verse to commemorate the trip, of which only nine copies were made. This image corresponds to the text on page 6 of the Doggerel Log [item no. 13352], “Through the Marble Gorge was sunny, Shooting rapids seemed just funny, But at Badger we unloaded all the duffle from the boats, Spent the afternoon in lining, and the evening in reclining, with backs sore from the portage of the duffle without coats.” On the back of the photograph in pencil is written, “Portage Badger Rapids 11/10/37.” 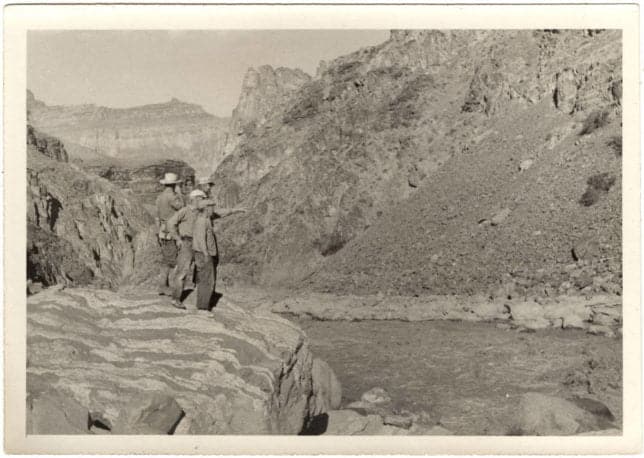 Unidentified members of the 1937 Carnegie-Cal Tech science expedition discuss geological features of the Grand Canyon near Hermit Rapids on the Colorado River. The expedition, lasting from October to November of 1937, included four scholars from the Carnegie Institute of Washington and the California Institute of Technology (John T. Stark, Ian Campbell, John H. Maxon, and Robert P. Sharp), a Grand Canyon naturalist (Edwin McKee), and three expert boatmen (Frank B. Dodge, Owen Clark, and Merril Spencer). The original eight-man team set out from Lees Ferry down the Colorado River in order to study the indigenous and metamorphic rocks of the Grand Canyon. River runner Buzz Holmstrom would later join them near Diamond Creek. 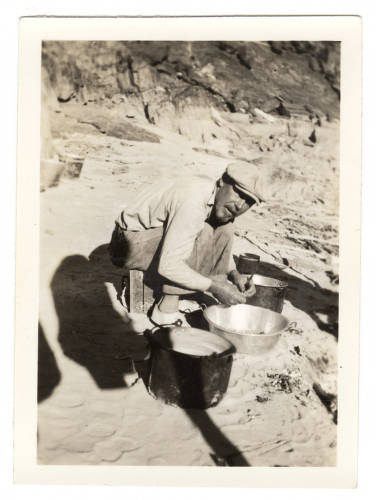 In this photograph, boatman Owen Clark cooks dinner for the 1937 Carnegie-Cal Tech science expedition. “Of the things we talked of most: Merrils mush, Jacks cheeses and toast, Johnnys trouble with limp bacon and his rivalry with Hinds, Excellence of Owen’s breads, Ian Peon in his bed. Roberts crooning, Eddies ripples and the index that he finds.” 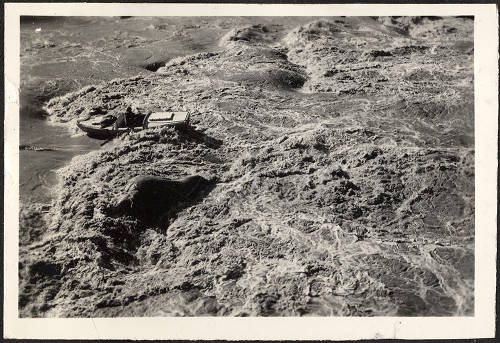 Boatman Frank B. Dodge attempts to best one of the most difficult rapids in the Grand Canyon, Lava Cliff Rapids, in this photograph taken during the 1937 Carnegie-Cal Tech science expedition.

What’s a better way to celebrate the centennial of the Canyon than by joining us on a Grand Canyon Rafting trip!  Our 2019 trips are filling fast, but we still have a few dates available.  Call or e-mail us today to not miss the opportunity to celebrate this milestone and GO GRAND in 2019.