Cathedral in the Desert

The following is an excerpt from my thesis written for the Environmental Humanities graduate program at the University of Utah, where I graduated in 2012. 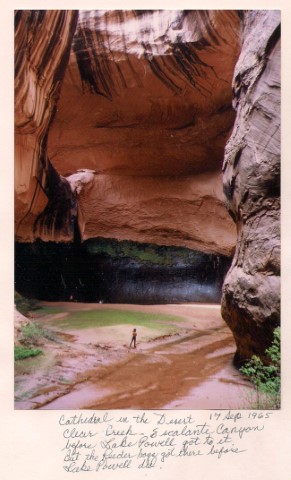 Finding Grandpa’s picture in that place was the first clue that he had been there before me. But at the time I floated within the walls of the drowned Cathedral in the Desert, and took my own picture, Grandpa’s ghost was just 4 years old and 40 feet underwater. “Cathedral in the Desert, 17 September 1965, Clear Creek- Escalante Canyon before Lake Powell got to it. But the Reeder boys got there before Lake Powell did,” read the caption written in cursive ballpoint pen. In the picture were my dad and one of his brothers running around an alcove rimmed with maidenhair ferns fed with falling water. The towering, curving walls looked as if they would close out sunlight, except for the few minutes of the noonday sun. While most of Grandpa’s pictures I found were black and white, this was an exception, revealing shades of green rarely seen in the desert. My photo in color film looked monochromatic, taken 42 years later. 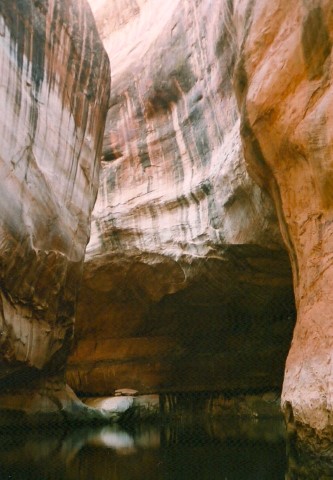 In my picture, the Cathedral was half buried up to the lip of the waterfall, even with a reservoir stricken with a decade of drought. An 80-foot thick, dull-white bleach zone marked the high point of the reservoir and dissected the contrast of red rock with streaking tapestries of desert varnish in blacks and browns. This was an important event on my journey, one that revealed currents in the river to follow. To see these canyons, these tributaries leading to the main stem of the Colorado River as my grandpa did, would be to witness a world of balance between humanity and the world that sustains us. I would learn that the question I was pursuing was not what I am willing to die for, but what I am willing to live for….

In April 2012, I drove the Hayduke to the Cathedral in the Desert to see how the high water of 2011 had reburied this reemerging icon. As I motored into the Cathedral, I barely recognized the canyon from just 5 years before. The elevation of the reservoir had risen 35 feet from when I was here in 2007, to 3,636 feet above sea level. Where I motored, the paradise Grant captured in 1965 lay 80 feet below me. I motored around the bend and around the next, and tied off to a chock rock exposed at the top of the second waterfall all but buried.

I camped that night up-canyon of the Cathedral, and did what Grant would have done– I marveled at the beauty of what was left. Beyond the black waters of the stagnant canyon, restoration is thriving in shades of green moss, maidenhair fern, and electric cottonwoods. The bleached zone on the canyon wall was dissected with fresh desert varnish, streaking down in vibrant contrast. 3,557. This is the elevation at which the Cathedral stands in full glory. 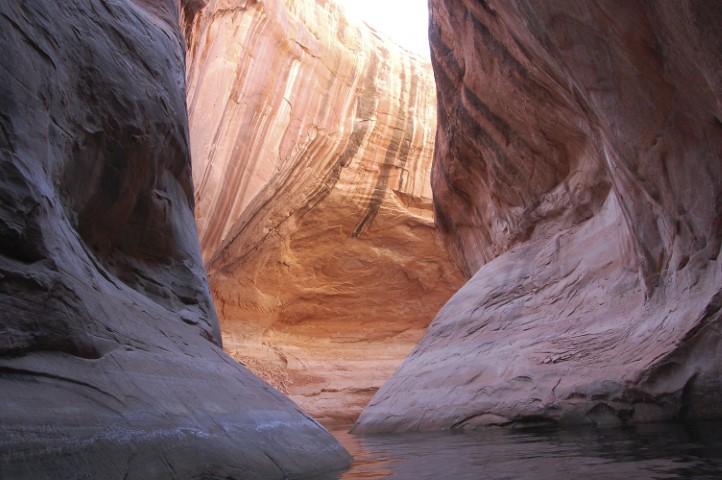 Through these drought years I think about what’s happening in Glen Canyon. It seems that since 2002 the water levels have fluctuated around 50% capacity. I go to www.lakepowell.water-data.com to see how far the Cathedral lies underwater, waiting for the day it dries out. Today the reservoir is just over 100 feet below capacity, 48% full. This means that the water covering the bottom of the Cathedral is 41 feet thick. I feel very ambivalent about high water years. While a thick snow-pack means big water in Cataract, I know all that water going downstream stops in Lake Powell and reburies places that have re-emerged. Over the last decade I have returned to the Cathedral in the Desert to see the progress of restoration, of the natural processes that carved these canyon walls reclaimed. And what I see is the dead zone of the reservoir ebb and flow between these arcing walls. With our changing climate I know that it is inevitable that this place will return. The Cathedral in the Desert remains an icon that represents the beauty of a special place lost, but also the fragility of providing water in the arid west that so many people depend on. To witness this re-emergence is to realize a world where we as humans find balance between growth, progress, and the beauty of the natural world that also sustains us. This is the world I hope to share with my children. 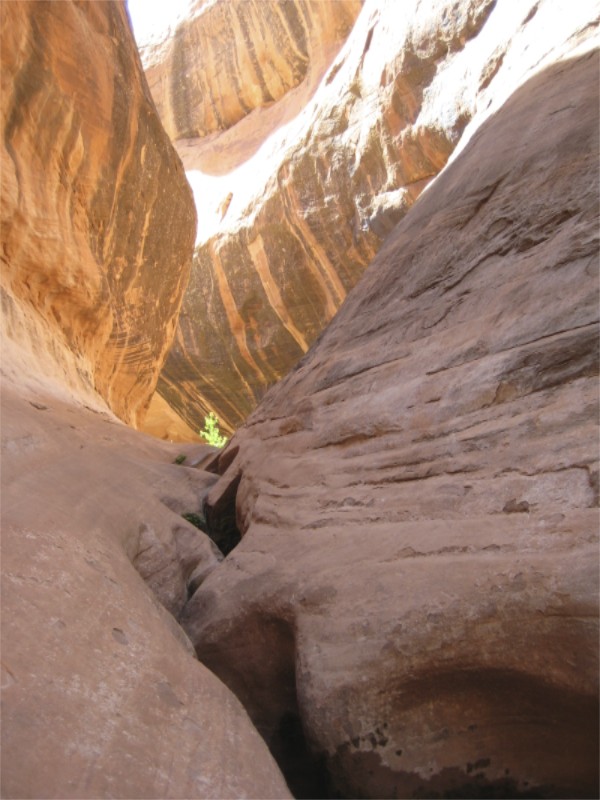 Home » Cathedral in the Desert 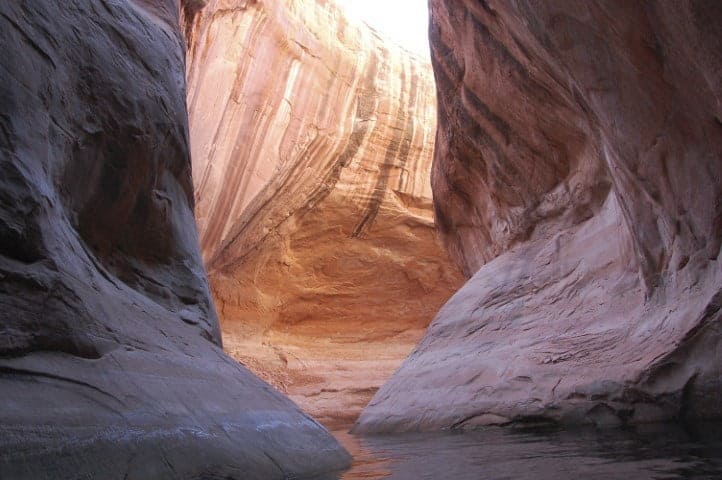