Photography captures a moment in time that can’t be repeated.  The Grand Canyon has been captured by the imagination of humans for thousands of years, and by photographers ever since the invention of the camera.  The Kolb Brothers became the first resident photographers of Grand Canyon in 1903, and built their house and studio on the South Rim in 1906.  Over the next six decades, Emery and Ellsworth Kolb established themselves as adventurers and talented photographers.  They even made a motion picture about running the rapids of Grand Canyon in 1911.  They showed this film at the Kolb Studio for over 60 years.

How to Capture a Stunning Photograph

“There will never be a photograph of the Grand Canyon that can adequately describe its depth, breadth, and true beauty.”

It has been said that a good photograph is made by four different factors: Composition, Story, Timing, and Light.   Image processing is a fifth factor that is highly controversial.  Many believe a photograph should be what the camera takes, and not the image that arises out of complex processing.  It is a combination of these factors that turns an average photograph into something special.

The Four (or Five) Factors of a Good Photograph

The composition of a photograph should take the viewer through the photograph.  It should welcome the imagination, inspire the soul, and hold the eyes.  The Grand Canyon is a perfect compostion.  It is full of texture, patterns, color, depth, visual tensions, and shapes.

The story of a photograph does not necessarily need to be obvious, but it needs to connect the viewer to photograph.  Some of the best photographs of the Grand Canyon are weather related.  They show lightning, snow, dark clouds, and beautiful sunsets.

A successful photographer will tell you that the secret to success is patience.  The perfect photograph of a particular place may only be available for a fraction of a second over an entire day.  Shadows need to be just right for many landscape photos.  Other times a photographer gets lucky and is rewarded for an action shot that captured just the right turn of events.

Light is the driving force of a great photo.  Shadows, sunrises, and sunsets are responsible for making a photograph “pop.”  Other times the light is too bright or too dark for an otherwise great composition.

Image processing is a very controversial topic in the world of photography.  Those in favor of it will say Ansel Adams was as good in the dark room as he was with a camera.  Those against it will argue you can’t improve on a natural shot of the Grand Canyon, Yosemite, or Yellowstone.  The “morality” of image processing is something we will leave to the individual.

7-Best Places to Take a Photograph in the Grand Canyon

When the United States of America began minting “The America the Beautiful” quarters in 2010, they chose the view from the Nankoweep Trail as the image for their Grand Canyon quarter.  The view looking downstream has been featured on countless calendars and magazine covers.

The viewpoint is accessed via Colorado River rafting tours though Grand Canyon or by backpacking into the Grand Canyon.

Elves Chasm is located deep in the heart of Grand Canyon.  In fact, the oldest rock found in the Grand Canyon is located where Royal Arch Creek enters the Colorado River.  This metamorphic rock is nearly 2 billion years old and is called the Elves Chasm Gneiss.

As you would imagine, Elves Chasm is most easily accessed via the Colorado River on a Grand Canyon rafting trip.  An insider tip:  once people swim in the pool below Elves Chasm the water will become turbid.  So ask the group not to swim until you get the photograph you are looking for.  Also the area has full sun mid-day, but later in the afternoon or early in the morning has varying levels of shade and shadows.

Toroweap is located on the North side of the Grand Canyon near Fredonia, Arizona.  From Fredonia, it is an 8 mile drive on AZ 389 to the turnoff to Toroweap Point.  The road to Toroweap is called Country Road #109 or the Sunshine Route.  This route requires 61 miles of extremely rough driving.  The road is extremely rough, full of rocks, and has a lot of washboard.
Toroweap offer dramatic views including a 3000 foot vertical drop above the Colorado River.  The landscape is dotted with ancient cinder cones hinting at the area’s volcanic geologic history.  Advance permits are required for camping at the Tuweep Campground as well as the backcountry of Grand Canyon.  Kanab, Utah based Dreamland Safari Tours offers overnight and day tours to Toroweap Point.

It is believed that somewhere near this viewpoint is where Spanish conquistador Garcia Lopez de Cardenas first set eyes upon the Grand Canyon in 1540.

Havasu Falls is located along Havasu Creek in the bottom of the Grand Canyon on the Havasupai Indian Reservation.  Permits are required to camp and travel on the reservation.  The color palette of the area is stunning with red rocks, blue green water, and green cottonwood trees.  Mooney Falls is another photo worthy waterfall in Havasu Canyon.  Colorado River and Trail Expeditions featured Mooney Falls in our insiders guide to the waterfalls of Grand Canyon.

Havasu Falls is located just upstream of Mooney Falls.  It is often photographed and has appeared on countless magazine covers and Grand Canyon calendars.  Beyoncé even filmed her music video for her song “Spirit” with Havasu Falls as a backdrop.  The song is featured in the “Lion King” live action remake.

The waterfall ad Deer Creek is approximately 150 feet high and plunges into a beautiful pool a short walk from the Colorado River.  The area offers multiple vantage points to capture the falls with a camera.  In addition, there is a trail that leads up above the waterfall and to the “Deer Creek Patio.”  The Deer Creek patio is another beautiful place to photograph.

Redwall Cavern is the result of thousands of years of erosion caused by the force of the Colorado River.  John Wesley Powell famously noted in his journal that 50,000 people could fit in the giant cavern.  He also referenced how during high water the floor would be covered with water.  Because of Glen Canyon Dam regulating the Colorado River Redwall Cavern’s floor is rarely covered by water anymore.

The location does offer shelter from the noon day sun, as well as somewhere to escape a big Grand Canyon thunderstorm.  It is a nice place to power nap or eat lunch.  Most importantly it is a great place to photograph.  The site has become especially popular in capturing silhouettes of people.  To capture these silhouette photographs in Redwall Cavern the photographer goes back deep in the cavern and takes the photograph looking out toward the Colorado River.

The view overlooking the Colorado River from Deadhorse Point is one of the most photographed viewpoints in the world.  Many people upon first glance think the view is of the Grand Canyon.  This is not true.  Deadhorse Point overlooks the mesas, buttes, pinnacles, and spires of Canyonlands National Park near Moab, Utah.  Canyonlands National Park is the home of Cataract Canyon rafting trips.

While in Moab be sure to check out the Tom Till Gallery.  Tom is one of the most renowned photographers in the world and leads photography tours in the Moab area and on the occasional river trip with Colorado River & Trail Expeditions.

This scenic point is often mistaken for being in the Grand Canyon.  The iconic bend in the river is actually a little bit upstream of the Grand Canyon in Glen Canyon.  The overlook is approximately 1000 feet above the river.  The trailhead to the Horseshoe Bend lookout is 1.5 miles roundtrip over a hardened path. 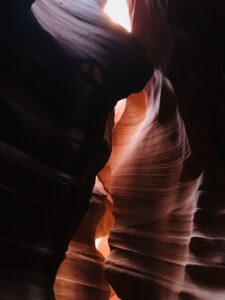 Antelope Canyon is located near Page, Arizona on Navajo Tribal Land.  A Navajo Guide is required to accompany anyone who visits Antelope Canyon.

Peter Lik’s photograph “Phantom,” was photographed inside this narrow sandstone canyon.  The photograph became the most expensive photograph ever sold in 2014, when it was sold for 6.5 million dollars.

Colorado River & Trail Expeditions offers rafting trips and tours throughout the Grand Canyon, Colorado Plateau and Alaska.  We will be celebrating our 50th anniversary in 2021, all under original ownership.  Feel free to contact us via our website, or call us directly at 1-800-253-7328. 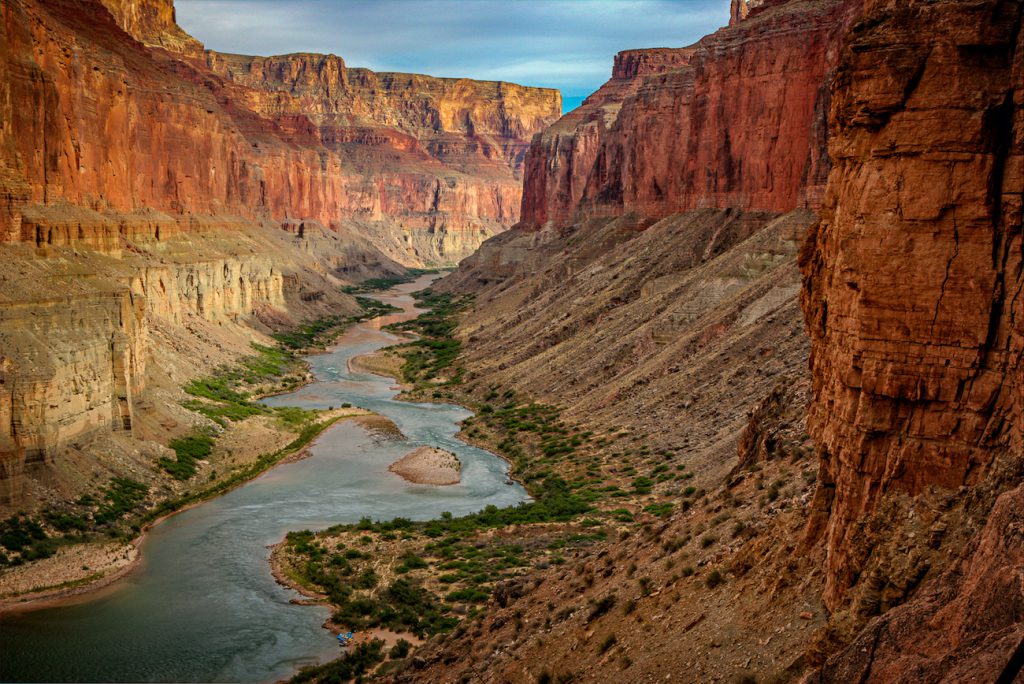