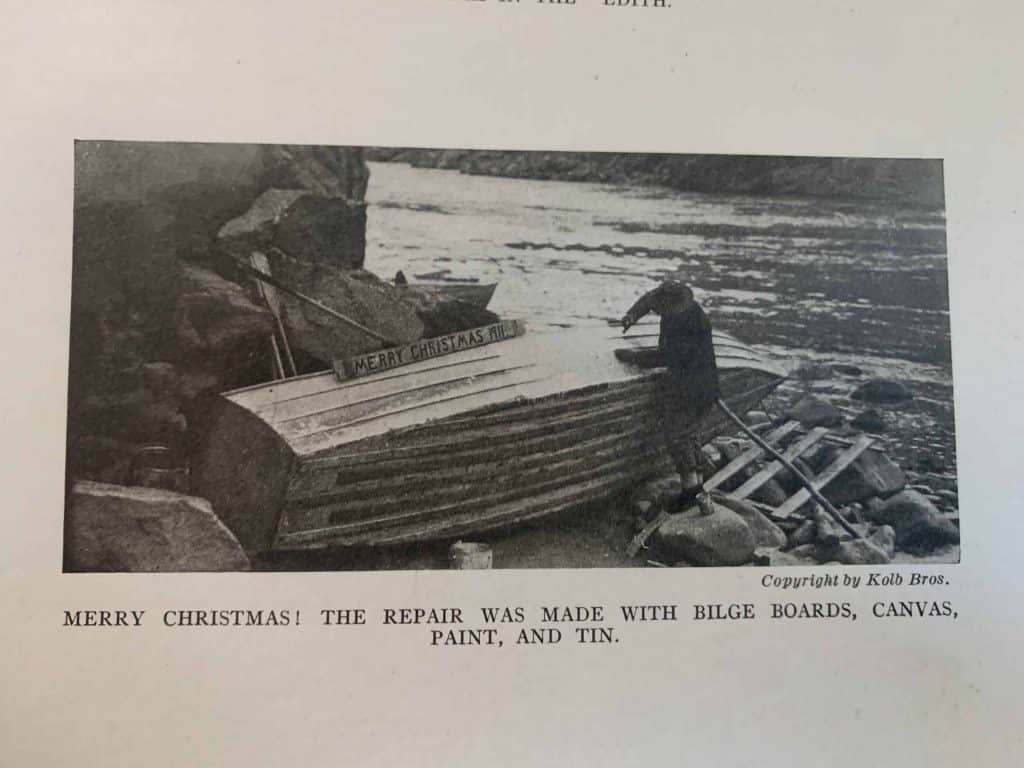 Emery and Ellsworth Kolb were living at Grand Canyon National Park by 1902.  They were adventurous, hard working, rock climbing, trail blazing pioneers who carved out a living on the South Rim of the Grand Canyon by taking photographs of tourists.  When they first came to the South Rim their darkroom was a blanket over a prospector’s cave.  Water for processing was gathered from Indian Gardens, this required 9 miles of hard hiking deep into the Grand Canyon and back.  They did some amazing stunts to capture never before taken photographs of the Grand Canyon landscape.  They dangled from ropes, climbed steep buttes, and even braved the rapids of the Colorado River to get the “perfect shot.”  The story below is  about the “Christmas Rapid.”   We have taken passage from Ellsworth Kolb’s book, Through the Grand Canyon from Wyoming to Mexico, to tell the story to our readers.  What an adventure it must have been!

Ellsworth Kolb:  “It is my duty to record another adventure at this point, in which we all three shared(Bert Lauzon had joined the expedition for the final leg of the expedition), each in a different manner.  This time I am going to give my brother’s record of the happenings that overtook us about four o’ clock in the afternoon of December the 24th, less than three hours after we left our friends a the Bass Trail with “Best Wishes for a Merry Christmas,..”

Emery Kolb:   “The fourth rapid below the Bass Trail was bad, but after looking it over we decided it could be run.  We had taken chances in rapids that had looked worse and came through unharmed;  if we were successful here, it would be over in a few minutes, and forgotten an hour later so we each the attempt”

“….Ellsworth went first, taking the left-hand side.  I picked out a course on the right being the least dangerous; but I was scarcely started when I found myself on a nest of jagged rocks, with violent water all about me, and with the other rocks, some of them submerged, below me.  I climbed out on the rocks and held the boat.”

“If the others could land below the rapid and climb back, they might get a rope to me and pull me off the rocks far enough to give me a new start, but they could not pull the boat in to shore through the rough water.  A person thins quickly under such circumstances, and I had it all figured out as soon as I was on the rocks.  The greatest trouble would be to hold the boat if she broke loose.”

“Then I saw the Defiance was in trouble.  She was caught in a reverse whirl in the very middle of the great pounding rapid, bouncing back and forth like a great rubber ball.  Finally she filled with splashing water, sank low, and the water pouring over the rock caught the edge of the twelve-hundred pound boat and turned her over as if she were a toy; my brother was holding to the gunwale when she turned.  Still she was held int he whirl, jumping as violently as ever, then turned upright again and was forced out…Ellsworth…disappeared…came up nearly a hundred feet below…struggling to keep on top but going down with every breaking wave.  When the quieter water was reached, he did not seem to have strength enough to swim out, but floated, motionless, in a standing position, his head kept up by the life-preservers.  The next rapid was not over fifty yards below.  If he was to be saved it must be done instantly.”

“I Pried the boat loose, jumped in as she swung clear, and pulled with all my might, headed toward the centre of the river.  I was almost clear when I was drawn against another rock I had never seen.  There was a crash, and the boards broke like egg-shells.  It was all done in a few moments.  the Edith was a wreck, I did not know how bad…My boat was not upset, but the waves were surging through a great hole in her side.  She was drawn into an eddy, close to the base of the wall, where I could tie up and climb out.  It seemed folly to try the lower end with my filled boat.  Climbing to the top of the rock, I could see half a mile down the canyon, but my brother was nowhere to be seen and I had no idea he had escaped.  I was returning to my wrecked boat when bert waved his arms, and pointed to the head of the rapid.  Going back once more, I saw him directly below me  at the base of the sheer rock, in an opening where the wall receded.  He had crawled out twenty feet above the next rapid.”

“These experiences were our Christmas presents that year (1911).”

“We repaired the boat on Christmas day.  Three smashed side ribs were replaced with mesquite, which we found growing on the walls.  The hole was patched with boards from the loose bottom.  This was painted; canvas was tacked over that and painted also, and a sheet of tin or galvanized iron went over it all.  This completed the repair and the Edith was as seaworthy as before.”

Ellsworth Kolb:  “This is Emery’s account of Christmas Rapid.”

Christmas Rapid was most likely Walthenberg Rapid.  Named after William Bass’ friend John Walthenberg.  The rapid is washed out at higher flows, but becomes more technical at lower water.  Walthenburg rapid is about halfway between Shinumo Creek and Elves Chasm on the Colorado River.