The rapids in the Grand Canyon are rated on a 1-10 scale. This may seem confusing to whitewater aficionados who have become accustomed to the more universal Class I-VI scale:

Class 6: Whitewater, typically with huge waves, huge rocks and hazards, huge drops, but sometimes labeled this way due to largely invisible dangers. Class 6 rapids are considered hazardous even for expert paddlers using state-of-the-art equipment, and come with the warning “danger to life or limb.”

The biggest rapids in the Grand Canyon are Crystal and Lava Falls which are rated anywhere from 7-10 depending on the water level. They have huge waves and require maneuvering. However, especially in Lava Fall’s case, they have a nice recovery zone after the rapid. So on the classic scale these rapids would probably be considered Class IV. Hance, Hermit, Granite, Bedrock, Dubendorff, House Rock, 231-mile, Sockdolager, Grapevine, Specter, and 24-mile rapid would also probably fit into this Class IV rating with most of the other rapids in the Grand Canyon rated at Class III. Grand Canyon rafting is always excititng. 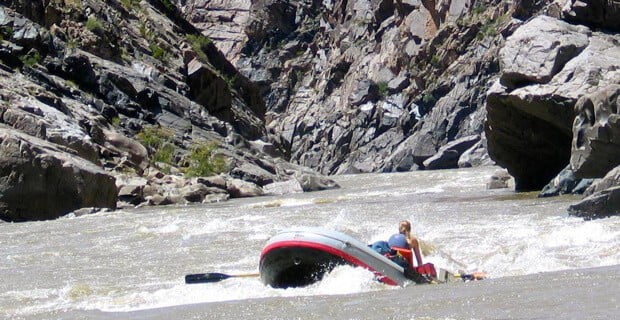