Here is an excellent blog from our friends at the Grand Canyon Trust:

Wallace Stegner called national parks “the best idea we ever had. Absolutely American, absolutely democratic, they reflect us at our best rather than our worst.”

For more than a century, protecting the Grand Canyon, in its entirety, has been an uphill battle. Responding to ongoing degradation by mining and commercial interests, President Theodore Roosevelt sought greater protection for our nation’s “greatest eroded canyon,” declaring that “the public interests would be promoted by reserving it…with such other land as is necessary for its proper protection.” Roosevelt’s 1908 proclamation of Grand Canyon National Monument was among the first of many responses to Grand Canyon’s never-ending threats.

More than a half-century later, Congress enlarged Grand Canyon National Park to ban the construction of two dams in the canyon’s gorge. But like many previous actions, the enlargement fell short in protecting “the Grand Canyon in its entirety,” as stated in its legislative language.  The purpose of the 1975 Enlargement Act was to declare “that the entire Grand Canyon… including tributary side canyons and surrounding plateaus, is a natural feature of national and international significance.”

In a show of bipartisan support for their state’s defining landmark, Arizona Congressman Morris Udall joined Senator Barry Goldwater in passing that law for “the further protection and interpretation of the Grand Canyon in accordance with its true significance.” But industry’s big bucks, along with current partisan politics, have eroded this 40-year-old commitment to care for our national treasure.

A Covenant To Keep

Grand Canyon is under siege. As Kevin Fedarko, author of The Emerald Mile, concludes, “Preserving its wonders – and defending them – is a covenant we are called to keep.”  Today, uranium mining and deep wells to support commercial growth still threaten Grand Canyon’s precious seeps and springs. And, developers want to build a tramway to carry 10,000 tourists a day to the bottom of the canyon where the Colorado and Little Colorado rivers flow together.

At the same time, Arizona Congressman Paul Gosar spearheaded a successful vote in the House that prohibits presidential designation of a new Grand Canyon national monument, intended to protect tributary side canyons and surrounding plateaus from the devastating effects of more uranium mining.

Congressional leaders, concerned about “intrusive government overreach,” are also attacking a policy that bans the sale of water in disposable plastic bottles in national parks. They say that it is robbing consumers of choice, could cost jobs, and might threaten visitors’ health and safety by causing them to drink more sugary soft drinks.  But in fact, the ban saves money for the parks by reducing their waste stream and associated cleanup costs. Visitors, too, benefit from being able to drink free tap water and buy refillable bottles from park concessions for as little as $2.50. As in Roosevelt’s era, private businesses continue cutting into “the public interests.”

The jury is out

Partisan politics and profiteers are pecking away at long-standing commitments to protect our national parks. “If you care about places like the Grand Canyon,” Fedarko note,  “there’s something inherently wrong about that….Every 15 or 20 years, it seems, the canyon forces us to undergo a kind of national character exam. If we cannot muster the resources and the resolve to preserve this, perhaps our greatest natural treasure, what, if anything, are we willing to protect?”

Next year, our nation celebrates a century since citizens and Congress had the foresight to create the National Park Service. The jury is still out on whether or not today’s political leaders reflect “our best rather than our worst” national character.

Wallace Stegner also called the West our “native home of hope.” Once we realize that cooperation defines the West’s character, we have “a chance to create a society to match its scenery”—and the prescience to preserve Grand Canyon, in its entirety for future generations. 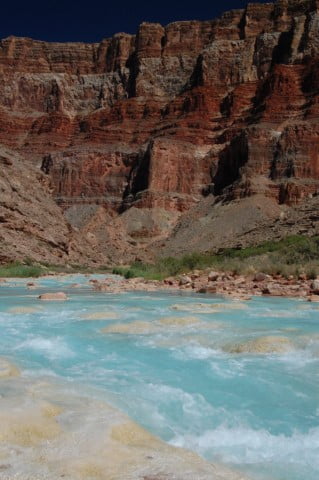