It is easy to see why working for Colorado River and Trail Expeditions is an ideal place to work. We are a family, where past and present crew members are all a part of that legacy. As current guides, we hear stories about the first generation boatman, the second generation and the third. We know these guides like brothers and sisters even if we have never met them in person. Most of our guides are related to someone who worked for CRATE in the early years, Mother, Uncle, Cousin, or fell into the family through close family friendship. What Dave and Vicki Mackay have created is a lineage of people connected through their love and passion of the rivers we run.

To lay out the family tree of each boatman would be an entire book in itself. Here I would like to highlight two different 3 generation boating families, the Quayles and the Reeders.

Amil Quayle started working for Western River Expeditions in the 1960’s and soon found himself working side by side with Dave Mackay. My Grandpa Grant Reeder signed up as a passenger on some of these early Western trips with Jack Curry, Amil and Dave, and soon became a regular. After a few trips, Grant accepted the opportunity to row the second set of oars on the 33 foot-long double-oar rigs. The video link above is a 8mm film of two different river trips, 1965 and 1966 in Grand Canyon, trips that included Dave, Amil and Grant. It was in Lava Falls on one of these trips that another boatman flipped. A passenger on the flipped boat was dealt a bleeding head laceration and the trip stopped at Tequila Beach to figure out what to do. More than 40 years later, on a Desolation Canyon river trip, Amil recalls that day. He said that as a Doctor, Grant decided that stitching up the man’s head was the best solution. “I was so mad!” recalls Amil. “It should never take 3 hours to give someone stitches! We still had miles to make that day”. I laughed when hearing this story. Grant was an Anesthesiologist, and probably didn’t have much practice at stitching someone up. I could just picture him, being overly paranoid while trying to keep the wound sterile in that environment.

In the early 70’s Dave and Amil split off to start their own companies, Colorado River and Trail Expeditions and Quayle Expeditions, respectively. Amil’s sons Bruce and Manx fell in love with the river and started guiding when they were old enough. Grant’s sons Stuart and Mark guided for Dave’s company. While Quayle Expeditions lasted only a few seasons before Amil chose to go work the land, farming in Nebraska, his sons where drawn to spend as much time in the canyons as possible. Bruce Quayle and Stuart Reeder have continued to run trips all these years.

Manx told me about a trip he was on with my uncle Mark. It was 1983 and nobody had seen that much water running down the Canyon since Glen Canyon dam was completed in 1963. Manx said that it was Mark’s first trip with clients on his boat and Lava was cranking. “Mark had a wild ride, down the left side”, he said. “But he managed to get through staying upright”.

My uncles Bruce and Russell had short stints on the river. Russell met Holly- who was Vicki’s niece- on a Grand Canyon river trip. At 17 years old, the two fell instantly in love and got married. My cousin Zak was soon born to the young husband and wife, and began guiding for CRATE while still a teenager. Zak became a senior guide in the ‘90’s and early 2000’s, dedicating 17 years to Colorado River and Trail. At the end of the 2007 river season it was Zak who convinced me to leave my job guiding in Moab to join the CRATE family.

In 2008 Manx’s daughter Kyndl Quayle started guiding for Colorado River and Trail Expeditions. Same year as me. She had been down the river before, and found a natural knack for reading water, rowing boats, and motoring S-rigs. Don’t know where she got it…but she continues the legacy, building her own stories to tell. Leading trips, rowing, paddling and motoring she has been a key part of the CRATE crew.

One of my favorite parts of taking people down the river is telling stories about the ancestors. Because nobody has a knack for words as Amil does, I like to read from his book of poetry, Grand Canyon and Other Selected Poems. People love to hear his poems about Shorty Burton, Tater- the Invincible Dachshund, and about Shawn from poetry class. When I read the poem Grand Canyon, many people tell me that Amil puts to words what they feel in the Canyon, but cannot describe. I love to tell people about a trip my dad, uncle Stuart and Grandpa did in 1969. They were at Lee’s Ferry on the 4th of July and Grant threw a string of firecrackers into the fire to celebrate. They where quickly reprimanded by park rangers, who informed them that launching the next day was Secretary of Interior Stuart Udall and Superintendents of the major National Parks to celebrate John Wesley Powell in a century memorial trip. Grant felt bad and apologized to a park ranger on the water a few days later. The ranger just laughed, and said, “I didn’t care, I thought it was funnier than hell!” Turned out to be Edward Abbey, who came from Arches to join the trip.

I feel very lucky to be a part of this crew, this family. Together our own stories grow. And even though the facts become blurred from one season to the next, the stories season, and get better and better. If you haven’t joined us to share your story around the chair circle at night, there’s no time like the 2015 season.

The best part is that anyone who has been down the river with us- is part of that family. Especially those Friends of CRATE who have been down on multiple trips with us. What a pleasure it is to see old friends and return to the conversations we left from the last time we went downstream together. For those who are not part of the family yet, you have an open invitation. 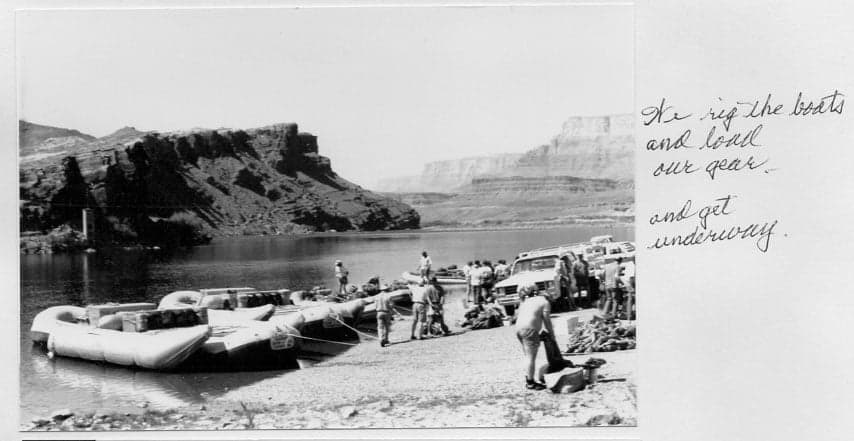