“Grant, in preparation, worked with Jack Kissner to produce a custom “sixteen-and-a-half foot, folding, rubber-covered battleship,” with “bulbous ends carved from balsa wood, and huge sausage-like sponsons along the sides, made from inner tubes of Fifth Avenue bus tires.” For added buoyancy he crammed in eight additional inner tubes and five beach balls. He named it the Escalante. Grant kayaked every rapid except Hermit and Lava Falls. In 1960 Walter Kirschbaum became the first person to paddle a rigid kayak through Grand Canyon, as well as the first to kayak every rapid without portage.”

Now to answer some common questions about kayaking in the Grand Canyon:

Why kayaking the grand canyon is such a special experience?

The Grand Canyon is the greatest place on Earth, and there is no better way to see it than via the Colorado River. The Colorado River winds 278 miles through the Grand Canyon. Along its way the river encounters over 150 named rapids, over 100 great off-river hiking opportunities, and at its deepest point you are about a mile deep in the gorge, surrounded by Vishu Schist rock that is almost 2 billion years old. Kayaking along the way is the icing on the cake. The river averages a drop of only 8 feet per mile, but 90% of that drop is in the rapids. This makes for big whitewater with nice recovery zones. Waves routinely reach 10-15 feet high and in Hermit, Granite, Crystal, Sockdolager, and Lava Falls they get even bigger. Everything about being right next to the water in a kayak is special. One of my fondest memories of kayaking in the Grand Canyon was running the last 10 miles of rapids solo. I just remember the sun glaring off the water before each rapid and having Johnny Cash songs spinning through my head, especially “Down, Down, Down into a burning ring of fire.” The whitewater is just part of the experience though, the camping, off-river hiking, and companionship of those on the river really add to the trip. I work for Colorado River & Trail Expeditions(www.crateinc.com), and we make a point of making the most of each day by getting up early and taking as many off-river hikes as possible. The other things that are great about the Grand Canyon is that it doesn’t have bugs and mosquitoes, it has an ideal climate for kayaking because the weather is typically hot and dry, and if you get hot, you can always take a dip in the cold 50 degree water. Camping along the river is luxurious, we bring cots for our guests, getting them off of the sand and away from the bugs. The night sky is another great thing about any Grand Canyon trip. The area is relatively free of light pollution and looking at the stars, moon, planets, and meteors from this amazing place is definitely a special experience. Through 10×50 binoculars you can see the Andromeda Galaxy which is a spiral galaxy about 2.5 million light-years from earth. During full moons you can see your shadow and I sometimes lead full moon hikes, taking in the night view and seeing animals you may not see during the day.

The best part of Kayaking the Grand Canyon?

It has to be facing Lava Falls rapid which is the biggest rapid on the Colorado River. Right before the rapid you can look up and see a small window on river right in the Basalt called the “eye of oden.” It is good luck to look at the eye. Then you are in the rapid. In a 37′ Motorized raft the rapid is exhilarating, in a kayak it is beyond words. The route one takes depends on water level. The right side generally gives the bigger ride, but many people who decide to run left lose their bearing and go straight into the “Ledge Hole.” On my last Grand Canyon trip this year we were eating lunch below the behemoth rapid when suddenly two 18′ Oar boats floated by us with their aluminum frames ripped off by flipping in the Ledge Hole. If you are running right you have to make it past the “Ledge Hole”, through the “v-wave”, stay off the “Black Rock” and survive the “Tail Waves.” If you run left you have to not lose your bearing on where the “Ledge Hole” is and make it past the “Chub Hole.”

And what sort of skill level you’d need to have – is there anyway a beginner could do it?

The Colorado River is a big volume river with gigantic waves and huge holes, but it has great recovery zones, and it is not really technical. Most of the rapids in Grand Canyon would be rated class III and Class IV with Lava Falls and Crystal possibly becoming class V at certain water levels. The first time I kayaked the entire Colorado through the Grand Canyon I did not have a lot of river experience, but I spent time in the pool perfecting my Eskimo roll until I could do a “Beer Roll.” A beer roll is where you roll over in your kayak without a paddle. You take an unopened beer or soda over with you. While you are upside down you open the can with one of your hands then slide it across the upside down kayak to the other hand. Then you roll the kayak without spilling your drink and enjoy your prize when you come upright. The Eskimo roll turned out to be very important on that first kayak run through Grand Canyon. I never swam, but I rolled the kayak multiple times in many of the rapids.

This article was written by Walker Mackay, a guide at Colorado River & Trail Expeditions 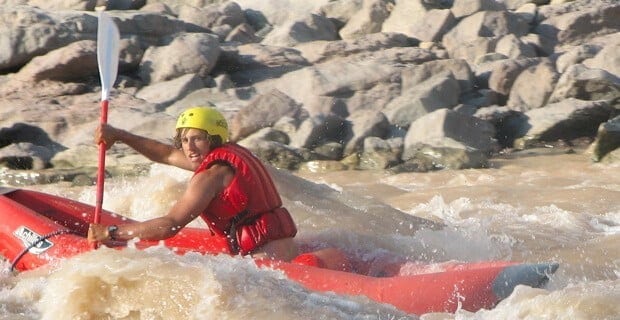