Located in Eastern Utah, Green River is already famous for its watermelons, rafting trips, Rays Tavern, sunsets, and the John Wesley Powell River History Museum.  You can  now add to that list the Monument Hill Sculpture Park.  The sculpture park features not one, but two land art sculptures by world famous sculptor Andrew Rogers.  The park has an interesting past and a lot of future potential.  The land for the park was originally purchased by Herbert Steiner.

Green River is isolated, and that is exactly what appealed to the railroad buff and retired Seattle school teacher Herbert Steiner.

Mr Steiner purchased 75 acres of land between the railroad tracks and I-70 and commissioned the building of “The Ratio” designed by famous Australian Land Artist Andrew Rogers.  Steiner financed the sculpture for $145,292.  “The Ratio” is based on the Fibonacci Sequence described by the Italian Mathematician who lived from 1170-1250.  Fibonacci’s manuscript Liber Abaci (1202) explored the ratio.   The ratio is found in patterns throughout nature including nautilus shells, leaf patterns, tree stem growth, and population growth.

Steiner claimed to have the sculpture built out of “love.”   He was particularly excited to have world famous land artist Andrew Rogers build “The Ratio.”  Steiner found “one of the greatest world-famous sculptors to build it,” and “It is going to be there until God knows when.  No one will remember me, but this is something that I leave that will be immortal.”  The project was completed on December 14, 2010.  The sculpture consists of 53 blocks measuring 39″ x 39″ x 68″.  The sculpture is 44 feet high and 42 feet wide and it is capped with a gold leaf block at the top.

In his book, Rhythms of Life: The Art of Andrew Rogers, Ken Scarlett describes sculptor Andrew Rogers “Like a cicada that has spent part of its life underground, then crawled out of confining tunnel to come forth into daylight, Rogers put his figurative style behind him and accepted abstraction…Rogers emerged confident and assured, articulate with a new vocabulary of forms.”  In Rogers Rhythm of Life Land Art Project  he has built 47 structures on all 7 continents.   This is the largest contemporary land art undertaking in the world.  Rogers has constructed an impressive Google Earth Tour of his Rhythm of Life Land Art Project on his website.
Andrew Rogers added a second sculpture to Green River’s Sculpture Park in 2013 with “Elements,” a structure composed of four 10 meter high towers representing Earth, Wind, Fire, and Water.  One of the towers is topped in 23-carat gold.

The Monument Hill Sculpture Park adds another layer of interest, character,  and beauty to the Green River landscape.   Like Herbert Steiner, we love Green River.  Colorado River and Trail Expeditions built our warehouse on the north side of town in the mid 1970s, and in 2022 it is still surrounded by alfalfa fields.  Green River is our base for our rafting trips through Desolation Canyon, Cataract Canyon, and Westwater Canyon.  So next time you are in Green River, Utah spending an afternoon before your rafting trip, make sure to check out Monument Hill Sculpture Park. 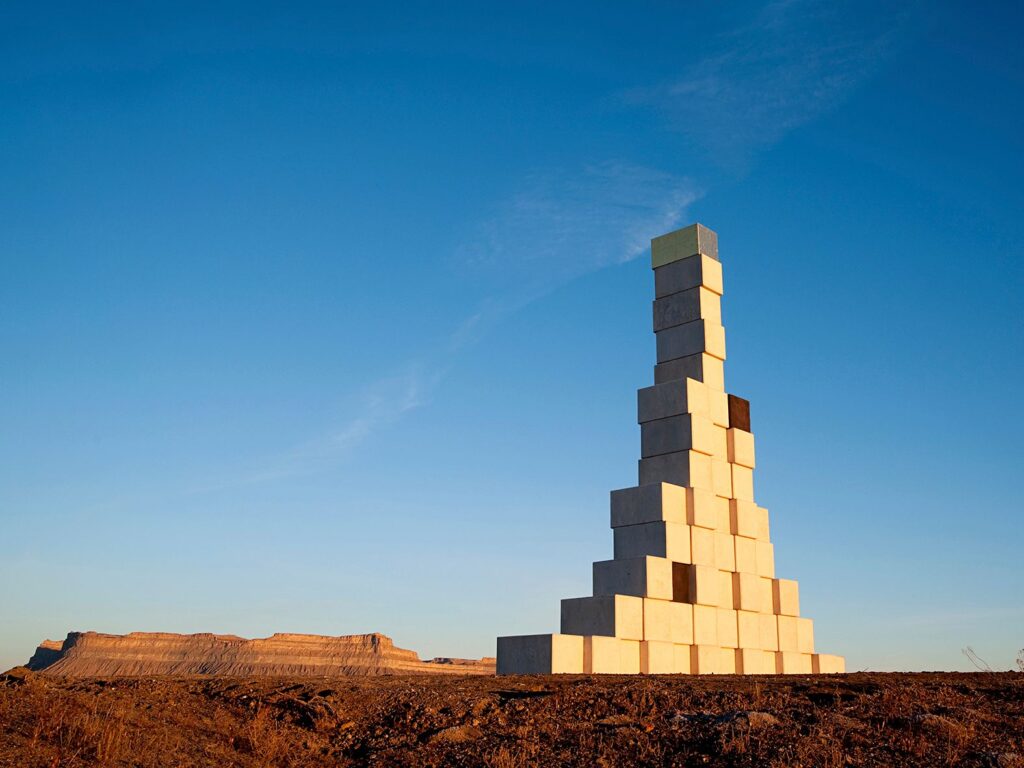