Flowers of the Canyon Country As the winter months bring snow and rain to the Canyon Country, the red desert sand becomes moist and fertile for the plants that find home here. With the warming spring temperatures, the landscape opens, bursting with colors to attract pollinators in hopes for reproduction. While some plants bloom consistently from year to year, others lay dormant waiting for abnormally wet seasons. Other opportunistic species bloom throughout the season, on a larger-than-seasonal cycle. Often times a strong monsoon season will find conditions prime for a fall bloom more spectacular than the spring. For those traveling downstream on a river trip, the following flowers might be spotted while drifting by on the boat or while hiking in side canyons.

Reaching heights of 4 feet tall, this yellow flowering plant blooms from the base up. Prince’s Plume thrives in soil rich in selenium, which gets transported by pollinating insects and can accumulate to toxic levels higher in the food chain. The Native Americans would mash up the roots to treat aches and pains. 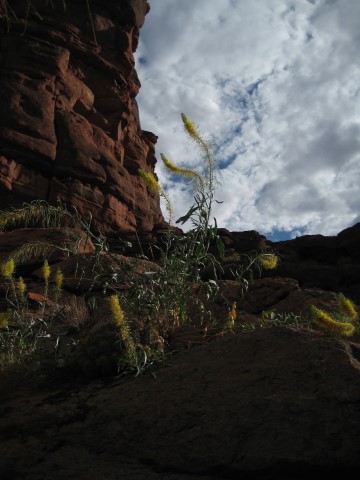 One of my favorite places to see Prince’s Plume bloom is in Cataract Canyon camping at Little Bridge Canyon on high water trips. There, the top heavy blooms nod in the evening breeze on cool May nights.

Usually found in shady side canyons next to springs or streams, the Monkeyflower blooms throughout the summer months. In Grand Canyon there are 7 different species closely related and nearly impossible to differentiate without the blooming flower. 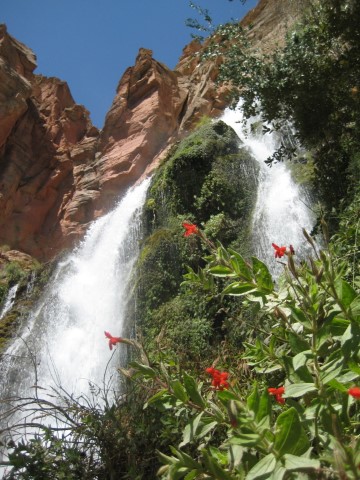 Some of the most spectacular places to see Crimson Monkeyflowers are found hiking to waterfalls in Grand Canyon. Hiking up Saddle Canyon and back to the narrowing V of the canyon, Monkeyflowers can be seen growing thick along the water’s edge. Thunder River falls is another place Monkeyflowers thrive, where the mist of the cascading water creates a moist environment even under the direct desert sun.

Often found growing next to Crimson Monkeyflowers, Columbine grow in less dense populations in shady canyons next to water. Like Monkeyflowers, there are 7 similar species in Grand Canyon blooming with a variety of colors. Because the nectar is stored deep inside of the flower, its main pollinators are butterflies with long proboscises and hummingbirds. Bees with short proboscises will often bite through the flower to get to the nectar and avoid the task of pollination. 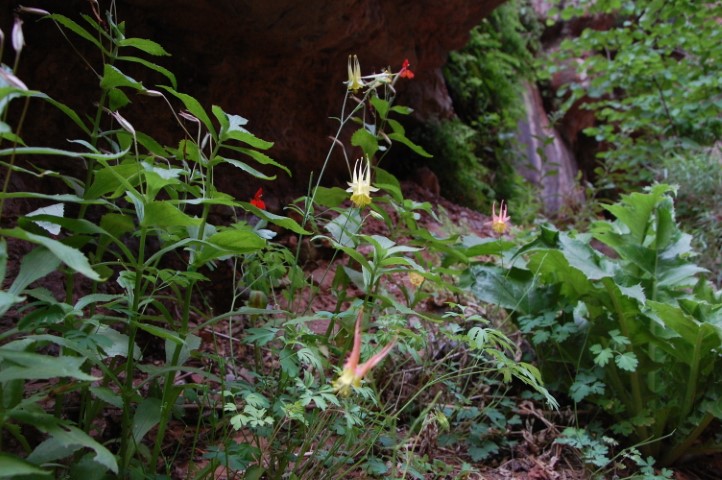 Rounding the bend to the falls in Saddle Canyon, in the narrowest spot between canyon walls is where you can see 3 different species of Columbine bloom. In red, pink and yellow, the backward facing spurs stand tall to the sky, hoping for butterflies not bees.

Once thought to grow for a hundred years before blooming, botanists now know that the Century Plant blooms after 20-40 years before dying. Stems extending underground called rhizomes can clone the next generation next to the mother plant. The flowering stock can shoot up 15 feet into the sky, the climax after a long life in the desert. 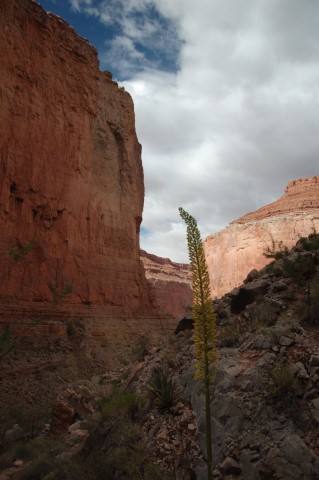 While hiking to the top of the Redwall layer of limestone through the Eminence Fault break from the eminence camp, Century Plants appear as candlesticks in the fading afternoon light. One Grand Canyon river trip participant informed me that the post-flowering stalk of the Century Plant makes a good walking stick because it is light in weight, rigid and strong.

Thriving after rainy seasons, Globemallow can be seen blooming both in spring and fall on talus slopes along the river. Seen in shades of reds and oranges, 10 different species of Globemallow can be seen in Grand Canyon. Because hybridization is common, differentiating between species can be difficult. Native Americans harvest the roots and make a sticky pulp in cold water to treat stomach pain and diarrhea. Globemallow can also be made into a tea that finds soothing effects. 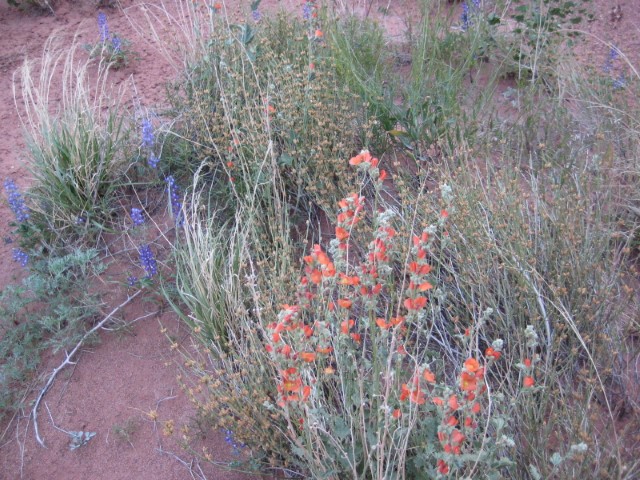 Driving to the put-in for Desolation Canyon in the spring feels like driving through an ocean of orange Globemallow blooms. Often opportunistic, Globemallow thrive within disturbed landscapes, lining the highways dissecting the desert Southwest. Hiking to the Doll’s House on a Cataract Canyon is a spectacular site to see globemallows bloom among other wildflowers.

Also called Moonflower, Sacred Datura blooms at night and tends to whither in direct sunlight. Because of heavy concentrations of toxic alkaloids found in the leaves, contact with the plant can cause fatal hallucinations. Hawk moths are the Datura’s main pollinator, and form a symbiotic relationship. Because of their extended proboscis, the Hawk moth can extract pollen from deep inside the flower. Hawk moth larvae feed on the alkaloid-rich leaves making them toxic to predators. 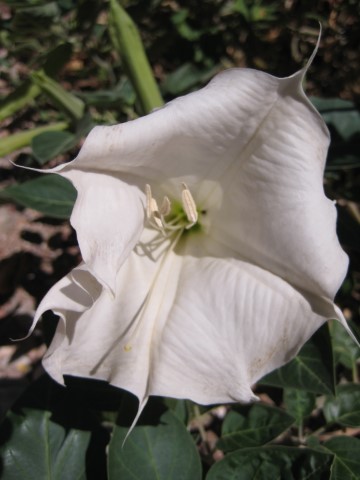 One of my favorite places to see Sacred Datura is hiking through the winding narrows of 75 mile canyon above Nevills Rapid. The tall, vertical walls of Shinamu Quartzite provide enough shade to protect the flower from shriveling up throughout the day. Looking at the shapes formed by the Datura Flower, its impossible not to think about the artwork of Georgia O’Keeffe.

Who can identify the following desert wildflowers? Feel free to post your answers in the comment section below. 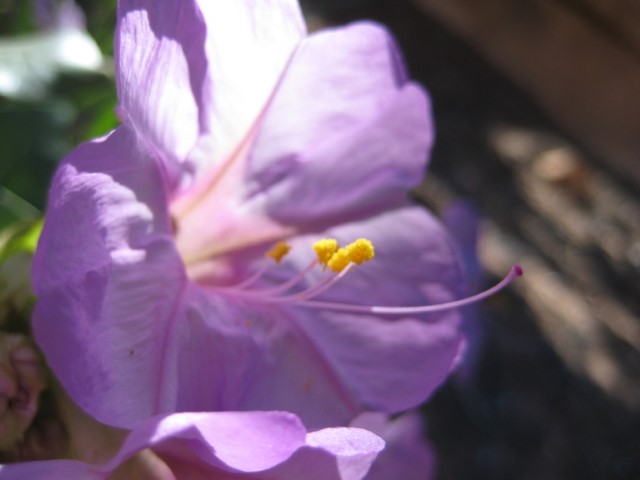 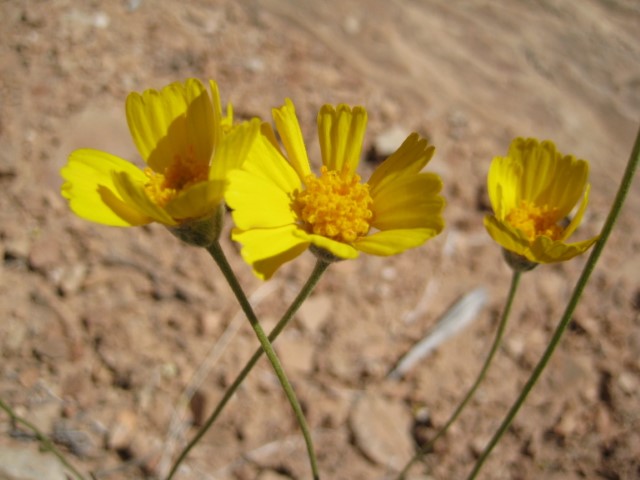 Home » Flowers of the Canyon Country 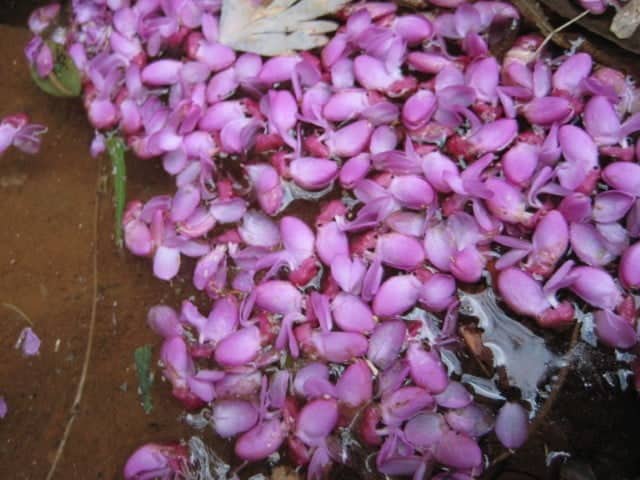