A Big Day Below Diamond Creek: A Guest’s Perspective

It can be hard to know what exactly our clients are thinking when shenanigans occur on a river tip. Except, perhaps, in this case. Here is CRATE passenger Art Hoover’s colorful, ever-so-slightly embellished account of the events that took place below Diamond Creek during a 10,000 cfs flash flood on August 7. I would like to add that the rest of the CRATE crew – Alex, Taylor, Nick and Kaia – shined as integral, problem-solving parts of this story, and that Art’s fellow passengers made all the difference with their calm, trusting attitudes. Thanks to Art for his help, good humor and for writing this entertaining piece! 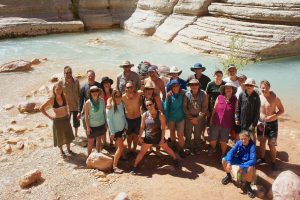 It was day seven and we were getting tired, dirty and feeling like the last 50 miles of our trip was going to be kind of boring. The rapids were pretty much done, the weather had been iffy (thunderstorms everyday) and then Captain M (Mikenna) said, “Hey, take a look at Diamond Creek! It’s flash flooding! I‘ve been doing this for 14 years and have never seen anything like that.”

It had been raining a little every day, but the amount of water coming down the creek was incredible! The water was yellowish-brown and fighting itself to make it down to the Colorado River. We could see debris coming down but it was hard to see everything through all of the water. We decided to push ahead, knowing that there was a huge amount of water being introduced into the river. What we didn’t realize was that the mud, trees, wood and everything else the floodwater could grab onto, had created a minefield in the river ahead of us. After rounding another corner, we realized instantly that the day just got exciting. As a passenger, I was fired up! This was something to make things interesting.

Captain M was realizing that this stretch of river just got potentially dangerous! We were pointing out large logs for her but there were too many of them not to hit. The propeller was instantly destroyed! Luckily we were able to limp the boat over to some rocks while the motor was jumping around due the highly damaged prop. We tied up to shore and cleared all the logs from under the boat and around the prop (at least 10-15 if them over 6’ long) and got the prop changed. Jack Sparrow, aka Captain M, realized the engine was overheating due to excessive debris stuck in its water inlet. We cleaned it out but the motor was cooked! Plan B: change the motor while in a field of rushing debris in the middle of a rapid. Perfect! The crew changed the engine while the boat was bobbing and weaving and we were back on track, like a Nascar pit crew.

We set off for about 100 feet and the new motor picked up debris in its water inlet and died too! We were a dead stick in the water as Captain M tried to clear the logs around the prop. She was on the back of the boat and jumped into the area where should would normally stand, (about a 3’ drop) at the exact moment our sister boat, still under power, bumped into us trying to keep us out of the rocks. Captain M fell and landed wrong, fracturing her ankle. Her eyes welled up instantly (she won’t admit to that) and she looked up at where we were going. The boat was headed strait for some large shallow rocks with no way of going around them! The boat groaned as it scraped over the rocks until it became fully stopped on two large boulders. (Quick recap: engine stalled, 37’ giant raft stuck in the middle of a rapid on rocks and Captains M’s ankle is fractured!)

You really don’t know what people are made of until you see how they handle situations. I would say this is a situation! We were all full of ideas, opinions and suggestions. Captain M said, “back off, give me 5 seconds!” She went right into damage assessment and put a plan together. (Pretty much a bad ass) She told everybody to get to the front of the raft and start to jump to try and jog the raft loose. Nothing. We were stuck! M let some air out of one of the side pontoons and re-fired the motor. We then started jumping in unison! (Side note – 10 strangers jumping on the front of the raft probably looked pretty funny!) The boat finally drug and scraped across the rocks inch by inch until we were free. That was close!

We were finally adrift down the Colorado, still surrounded by trees from the flood. I even saw a telephone pole! The river stunk. It smelled like mildewed wood and nasty mud. The amount of debris in the water made it almost impossible to pass without damaging another motor. Captain M finally decided to call it a day and get her ankle looked at. We made camp and got her ankle wrapped. Luckily, one of the swampers was a nurse and one of the passengers was a doctor, so she was in good hands.

The biggest thing for the passengers out of this whole ordeal was that the drag bag with the beer was still intact! 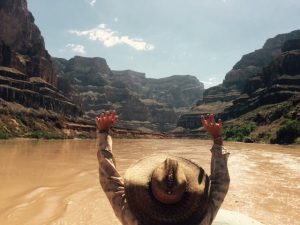 Home » A Big Day Below Diamond Creek: A Guest’s Perspective 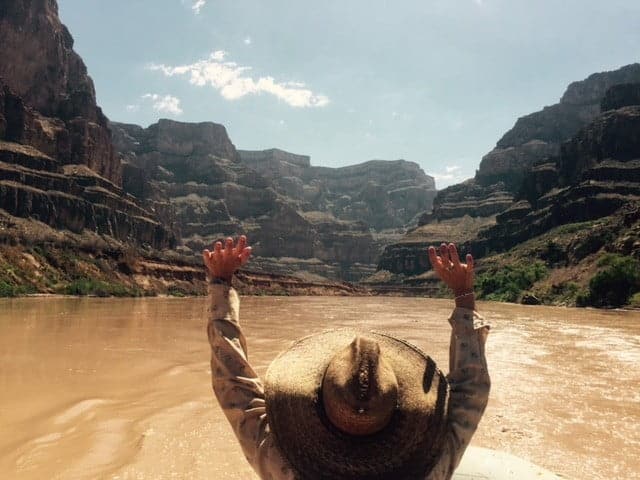