I first witnessed Saddle Canyon in the mid 90s, and I have been captivated by its narrow walls, greenery, and small gurgling stream ever since. On a 2-boat motor trip in early August 2016, while driving past Saddle Canyon on my way to the Little Colorado, I had noticed that a big flood had come down the canyon. The delta entering the river was barren of greenery, and where the plants and vegetation once stood was now covered in cobble sized rocks, dead trees, and some black charcoal sand. It was obvious a big flood had come through the canyon, and I made a mental note at that time that I needed to make sure to see Saddle Canyon the next time I was fortunate enough to travel through the Grand Canyon.

Three days later, on that same early August trip our group got to witness firsthand a powerful monsoon storm. The rain began just below 140 mile canyon. Shortly after, hail the size of nickels started, and side tube tarps and spare life jackets were brought out to protect our guests from the sharp pain caused from the falling ice. Then the rimfalls started. I remember thinking how lucky I was to be able to eat Ice out of the sky at the bottom on Grand Canyon in August while watching upward of 100 different rimfalls cascade off the cliffs of the Muav Gorge. We stopped at Olo and watched the thundering dark red waterfall. The guides: myself, Ben Reeder, Wayne Ranney, Jennifer Lair, and Ryan Pearl all were excited to take photos and share their excitement with each other. Then the rain stopped and the sun emerged. Probably the storm had only lasted 30 minutes but had made a huge impact on the landscape and those lucky individuals who got to be part of it. A couple days later we witnessed the newly formed Granite Springs Rapid and heard the tale of a trip that had been stuck at Diamond Creek for a couple of days. They had hiked up the canyon and mentioned the D10 was stuck on an Island of gravel between two huge ravines.

Fast Forward to September 1. Our trip had spent the morning in the Supai Sandstone of North Canyon, ate lunch at Redwall Cavern, and now was enjoying the overcast weather provided by a light wall of clouds above and around us. The plan was to hike Saddle in the afternoon and see what the flood from early August had done. As we rounded the bend at Saddle, two other trips must have had a similar idea. Azra, with Wayne Ranney and Jed, looked like they were just about ready to head downstream, and Western’s two boats of guides and guests were probably not too far behind. My trip was just one boat, and we set up camp at the lower Saddle camp. After Western left, we would make our way up the canyon. It became incredibly annoying when the Sun decided to break free of the clouds just as we started the unloading process. Then, just as the last dish bucket was filled and put on the table, the clouds once again covered the sun. Not long after, the shadow from the Redwall cliffs blanketed our camp, Westerns boats disappeared, snacks were passed out, water bottles filled, and our group started hiking. Yendor, our celebrity crew member, volunteered to stay behind and keep our camp safe from ravens and wind gusts.

As we made our way up the trail our group separated into two. I was leading the faster hikers and my swamper Ryan Curry was sweeping and keeping track of the slower hikers and those taking a lot of photos. By the time our faster group got up to the lush green valley there was a small spattering of rain drops. The rain then stopped and started again. This time it was steady, but really light. As we got to the narrows I was captivated by the big changes that had occurred. The small pools were filled with gravel and all of the plants and flowers at the mouth of the narrows were gone. Then, as I rounded the next bend I noticed the huge chokestone was gone, and it was an easy stroll to the bottom of the waterfall that had grown by about eight feet now that the debris and gravel held by the chokestone was gone. I tried to explain to my small group how big the chokestone was. With my hands outstretched I explained it was about 8 feet tall by 10 feet wide and extended at least 8 feet back. By this rough calculation it was comprised of 640 cubic feet of rock. I knew a cubic foot of concrete weighed 150 pounds. Therefore the rock must have weighed 96000 lbs or almost 50 tons. And it was gone. There was no sign of it anywhere. From where the rock once stood I looked at the clear cascade of water coming over the top of the waterfall. Recalling all of the pushing and pulling I had done over the years to get my adventurous passengers to the base of the waterfall and beyond into upper Saddle Canyon with Dave Brown and Zak Reeder. Then I noticed a drastic change in cloud color in the upper Saddle drainage. I told everyone it was time to go. We didn’t want to experience the fate of the 50 ton boulder. Just about that time it started raining hard and I hurried my group of six out of the narrows and on our way back to camp. Paul Montano, a great photographer on the trip, took a couple photos on the way out. Paul was in awe of the rain, light, and small trickles starting to come down the narrow walls.

We caught up to our slower group, who had also decided to turn around, at the end of the valley, and everyone was heading down enjoying the sounds of thunder and the big rainstrorm from the safety of the upper slope trail. As we neared the end of the trail a big rimfall could be seen flowing from the canyon upstream of Saddle. Then, as we were careening through the switchbacks the roar started. At first I thought it was from a windshift carrying sound from the upper side canyon flash flood, but as we traveled to where the trail leveled off it was obviously coming from the Saddle Canyon drainage. Saddle had flashed big again and it was full of dark brown sludge and rolling boulders shaking the ground. I looked at my watch and exactly 45 minutes ago we had been at the narrows when the rain started coming down in sheets. 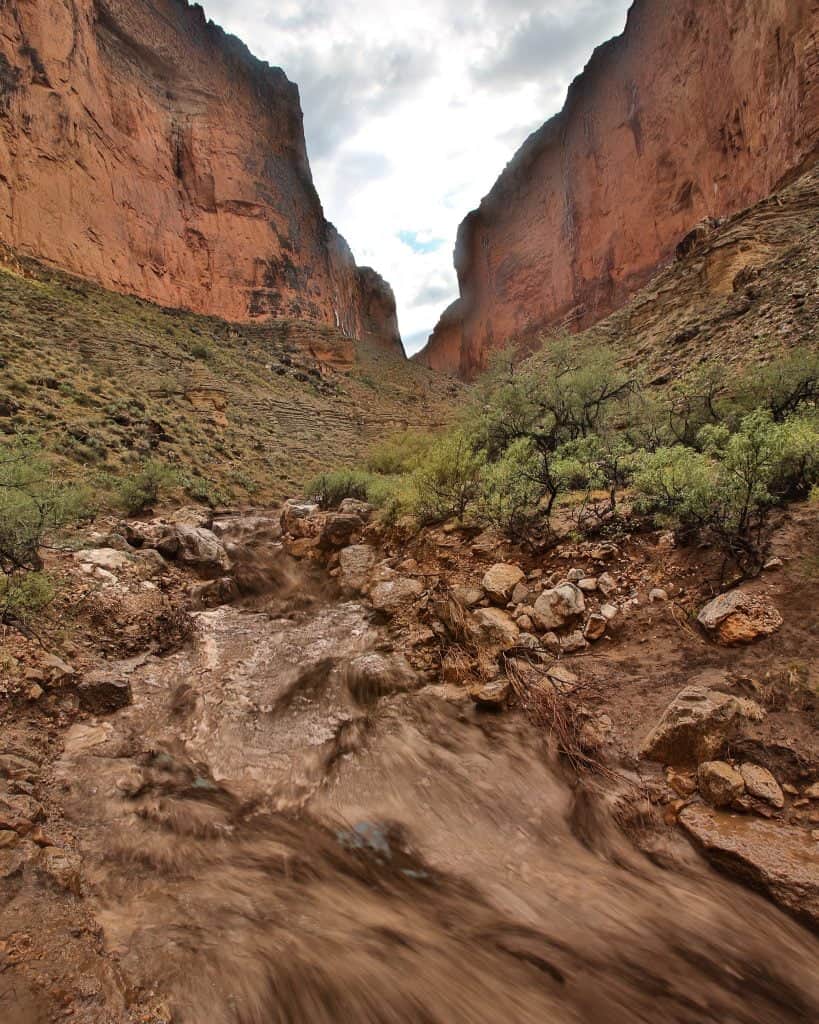